Prof Abdool Karim on smoking, eating out & school: 'Everything we do seems contradictory' 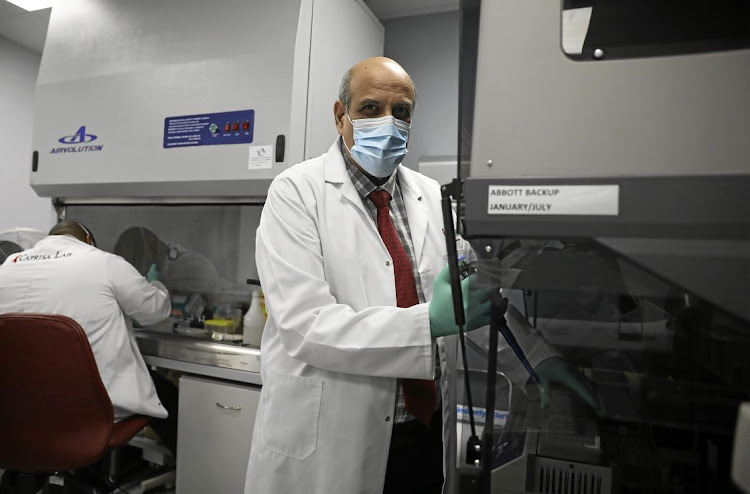 Prof Salim Abdool Karim says the Covid-19 pandemic is progressing in SA as predicted. He said if parents wait for a vaccine before sending children back to school, it may never come.
Image: Sandile Ndlovu

The chair of the Covid-19 ministerial advisory committee, Prof Salim Abdool Karim, says that while many of the measures taken during lockdown may seem contradictory, SA has to find a way to “work with the virus”.

Abdool Karim was responding to a question by Jacaranda's Martin Bester about whether children returning to school was the right decision.

Abdool Karim added that SA is in the same situation as many countries, explaining that “we've got to learn to live with this virus. We know the low risks in children and low clinical illness in children. So it's reasonable we try to go back to school and to work.”

He said that if SA waited for a vaccine before sending children back to school, “a vaccine may never come, or if it does come, it may be quite a while".

He said the mitigation measures that we now have make going to school and going to work at least relatively safe.

On smoking and Covid-19, Abdool Karim maintained that smokers are at “higher risk”.

“There are two studies, both from China, that looked at smokers and how they do in response to Covid-19, and what they showed was that smokers have a worse outcome. They have a higher death rate than non-smokers. In fact, it's quite substantially higher. The issue of smoking means that when they get this immune response in their lungs, they go into distress much more quickly and they have more difficulty recovering — they die more.”

Speaking about the number of infections and deaths, Abdool Karim insisted the numbers about SA and Covid-19 are as predicted.

“On Easter Monday I shared with the country what our situation was and what I said would occur. We had done well early on in flattening the curve but I said there is a difficult truth that I have to share with you. And that difficult truth is that as we release restrictions, the epidemic will come back.”

He also addressed the denialists, laughing it off by saying, “I've been through this before. I was there at the start of HIV. People came up with every conspiracy theory you want. You just have to expect that there will be those who will do that.”

Abdool Karim said though the reality is that most patients who get coronavirus will recover, with the number of people who will get it, even though it's a small proportion, the number of deaths remains high.

University of the Witwatersrand Professor Shabir Madhi says airborne transmission of Covid-19 is a reality.
News
1 year ago

A vaccine before the end of 2021? Unlikely, says ‘bearer of bad news’

Get used to masks and social distancing until the end of 2021.
News
1 year ago