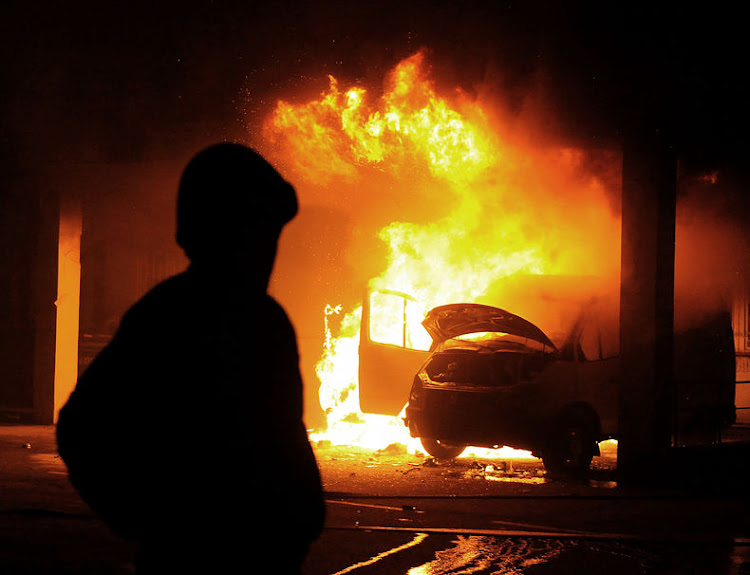 Four people were killed when a car crashed into a wall and burst into flames in Cape Town early on August 15 2020. Stock image.
Image: 123rf/bumbledee

Four people were killed when a car hit a wall in Cape Town early on Saturday.

Three bodies were found in the remains of the burnt-out car and the fourth was found on the roof of a house alongside the R300 in Belhar, said Cape Town fire and rescue services spokesperson Jermaine Carelse.

“The vehicle had been travelling on the R300 in the direction of Bellville when it left the roadway and collided with the Vibracrete wall,” he said.

Carelse said the alarm was raised at 5.48am. When fire crews from Belhar and Kuils River arrived, they found the vehicle in flames.

“Three bodies, burnt beyond recognition, were trapped inside the vehicle. The body of a fourth person, an adult male, which had been flung from the vehicle, was found on the roof of a house in Signal Close, Belhar,” he said.

“The fire was extinguished by about 6.30am and the scene was handed over to the SA Police Service.”

Four dead after dagga-laden car crashes into bakkie on freeway

Four people died in a horrific crash after their vehicles, one which was laden with cannabis and cigarettes, collided on the N2 in KwaZulu-Natal on ...
News
2 years ago

The driver of a VW Polo vehicle suffered minor to moderate injuries when his car was rear-ended by a minibus taxi and sent crashing through the ...
News
2 years ago