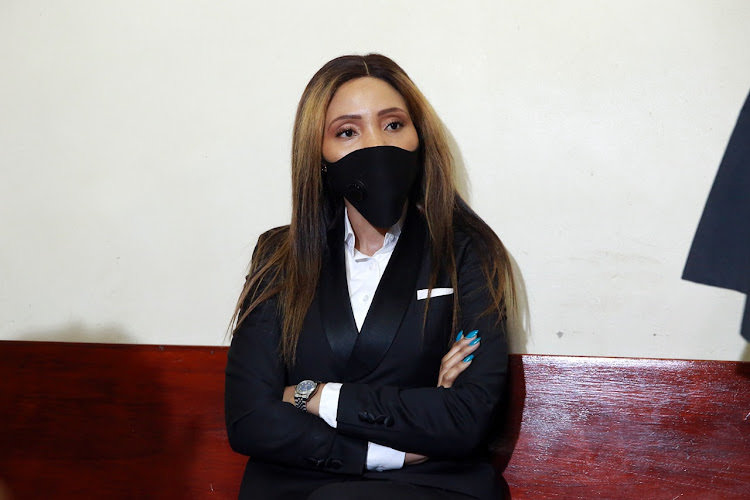 Norma Mngoma’s arrest was an “orchestrated scheme” to bully her and “delete specific information” from her electronic devices, said the wife of former finance minister Malusi Gigaba in court papers.

Mngoma was arrested in July after allegedly damaging a Mercedes-Benz G-Wagon that was being driven by her husband — by repeatedly scratching it. There was also an allegation — leading to a charge of crimen injuria — that she had sent an insulting text message to Peterson Khanyisani Siyaya.

But, says Mngoma in court papers filed at the high court in Pretoria on Wednesday, all this was just a pretext: “The entire arrest was an orchestrated scheme to intimidate me, to bully me and ultimately to gain unlawful access to my gadgets, to delete specific information and to violate my privacy.”

She continues: “The purpose for the deletion is completely nefarious, unlawful and potentially constitutes a criminal offence. That it has been perpetrated in conjunction with the Hawks is totally unconscionable.”

She wants the court to declare her arrest unlawful, set it aside and order the Hawks to return all the information that has been deleted from her electronic devices.

Mngoma says that days before she was arrested the Hawks came to her house and took all her electronic gadgets. They said it was because of the text message she had sent to Siyaya. But when she voluntarily offered them the phone that included that particular message, they insisted that they wanted all her electronic equipment.

Norma Gigaba appeared briefly in the Pretoria magistrate’s court on September 14 2020 following her arrest on July 31 2020. She allegedly damaged a R3m Mercedes-Benz G63 AMG which her husband, former minister Malusi Gigaba, had borrowed from a friend.

On his Instagram page, business owner Peterson Siyaya is a man with a taste for the finer things in life, from flashy clothes and watches to Louis ...
News
1 year ago

She battled to get the equipment back from them and when she finally did, by threatening her husband to approach the ANC’s leadership and eventually taking legal action, “what was more shocking and concerning to me was that certain information had been deleted.”

“The full nature and extent to which my gadgets were tampered with and the removed information is not yet clear. Every attempt by my attorneys to ascertain such information has been met with stalling tactics,” she says.

“It would seem there was a conscious and systematic pattern to these erasures which my legal representatives and I are still in the process of ascertaining,” says Mngoma.

Her affidavit points to other factors that she says make her arrest unlawful and “nefarious”. Malicious injury to property and crimen injuria were not priority crimes, she said and should not have involved the Hawks. And, the Hawks that were involved in her arrest, Sgt Norton Ndabambi and Maj-Gen KM Mavuso, were from the Hawks’ Mpumalanga office instead of the Pretoria or Johannesburg offices where the alleged offences happened — “the specific officers who arrested me were acting outside their area of geographic and legal jurisdiction,” says Mngoma.

She says she was twice refused the right to legal representation: when they were taking her devices — about 10 days before her arrest — and she asked to speak to a lawyer, “they told me that the right to speak to a lawyer does not apply to investigations conducted by the Hawks, but only to investigations conducted by the regular police”.

When they took her to Brooklyn police station on a Friday evening, “Mr Ndambambi spoke brazenly to my face and said ‘You will spend the entire weekend in the cells. Even your lawyer will not be able to assist you because we are going to drive away with the dockets and switch our phones off'.

“The orchestrated plan with my husband was that I should be kept in custody the entire weekend,” says Mngoma. Indeed at the Brooklyn police station where she was taken into custody there were incidents recorded in the occurrence book, but there were no accompanying statements or dockets, she says.

Norma Gigaba 'a bit traumatised' after cold night in jail, says her lawyer

Norma Gigaba was under emotional strain after spending a night in a cell away from her children following her dramatic arrest by the Hawks at the ...
News
1 year ago

Mngoma said that when her legal team finally got their hands on the docket, it “established convincingly that there is absolutely no basis for the arrest”.

On the charge of crimen injuria, Mngoma says that the “high point” of Siyaya’s statement to the Hawks was that Mngoma insulted him by saying that “he suffers from Aids and he is a dog who sleeps around with all the women and also gets tenders”. The exact content of the text message is not repeated in Mngoma’s affidavit but she says her SMS never said he was HIV positive. “Even if it did, it is not a crime to say a person is HIV positive,” she says.

On the malicious injury to property charge laid by her husband, Mngoma says that the “confession” she gave the Hawks was illegally obtained because she was not informed of her rights, including her right to a lawyer.

In the “confession” statement she made to the police, she says: “I and Malusi Gigaba had differences and I have been harbouring anger against him and eventually because I believe he has extramarital affairs. On 20th at around ... 8pm of 2020 I snapped and took a vegetable slicer and scratched the car.”

But Mngoma says not only was this statement illegally obtained but there is no offence disclosed: “On the contrary, it points to extreme provocation and involuntary conduct traceable to the type of abuse many women face in our country at the hands of their spouses, who are serial philanderers. In short, the statement itself discloses a valid defence in law. It is accordingly essentially exculpatory.”

The state capture commission heard on Thursday how former minister Malusi Gigaba paid for his tailored suits in cash, allegedly given to him by the ...
Politics
1 year ago

Norma Gigaba reclaims her laptop, cellphones seized during her arrest

Norma Gigaba reclaimed her electronic devices from the Brooklyn police station in Pretoria on Tuesday morning.
News
1 year ago