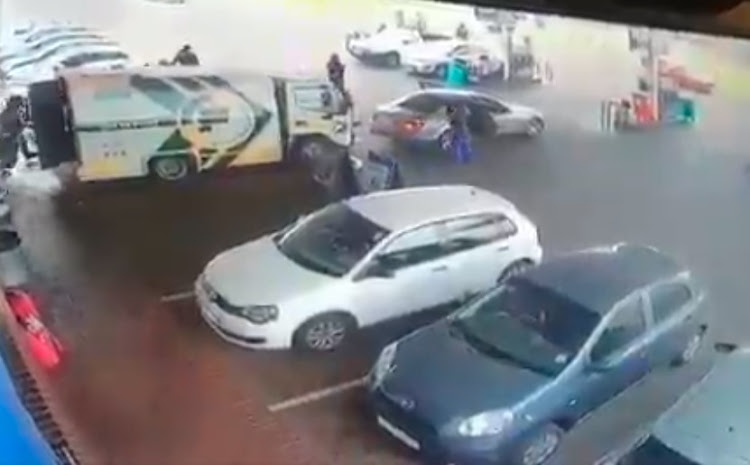 A Mercedes-Benz with three suspects attempted to block the cash van and instructed the driver to open the vehicle to access any further cash and firearms inside.
Image: Screengrab of video

An armed gang made off with an undisclosed amount of money after a cash heist at a petrol station in Witpoortjie, Roodepoort.

Fidelity CEO Wahl Bartmann said officers were collecting cash when they were attacked at about 11am on Tuesday.

One suspect was carrying a rifle and attacked a guard as he entered the cash van and cash was taken.

A gold Mercedes-Benz with three occupants then blocked the exit route and instructed the driver of the cash van to open the vehicle to gain access to more cash and firearms inside, said Bartmann.

The guard refused and the suspects eventually fled in a white Audi A4 and the C class Mercedes.

“We are very concerned about the spike in incidents. We definitely saw a decline in the first half of the year but this is changing rapidly,” said Bartmann.

“At present there have been no arrests but we are working closely with SAPS and our specialist investigative teams. Any information from the public is welcome and should be communicated immediately.”

A suspect who was wanted by the Hawks was arrested in Hillbrow, Johannesburg, at the weekend.
News
1 year ago

Bloemfontein hit by spate of violent CIT robberies — all before teatime

Bloemfontein is busy mopping up after a spate of violent cash-in-transit robberies, seemingly committed by a single gang.
News
1 year ago

A cash van landed inside a residential property in Welgelegen, Cape Town, on Thursday after its driver tried to flee from robbers. He died of gunshot ...
News
1 year ago