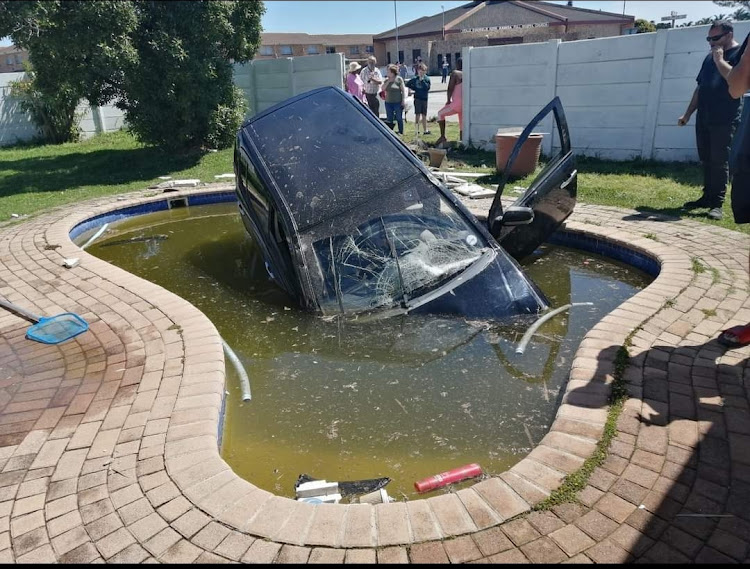 SPLASH LANDING: Two cars, driven by a man and his ex-wife, crashed into two neighbours’ yards in Kabega Park on Monday. One of the cars landed in a neighbour’s swimming pool
Image: PHILLIP WOLFSBURG/ PORT ELIZABETH TRAFFIC UPDATES

A bizarre accident in which a Port Elizabeth man and his ex-wife — travelling in separate cars — crashed into each other before careening through the walls of two neighbouring houses left the homeowners stunned.

While the man crashed through a wall and into a swimming pool, the woman’s car levelled the neighbour’s boundary wall in Van der Stel Avenue, Kabega Park.

Luzuko Sloti said he had been at work when his mother called on Monday morning to tell him about the accident.

A white Polo had crashed into their boundary wall, knocking it down and skidding into the garden while, at the same time, a black Geely had crashed through Sloti’s neighbour’s wall, landing nose-first in the swimming pool.

The Polo had allegedly rammed into the back of the black car, causing it to crash into the wall, witnesses said.

“My mother was shocked by [the sound of] a crash into the boundary wall and went outside,” Sloti said.

“The car crashed into the wall and into some bricks that we had packed inside the yard.”

According to Sloti, the man told him that the driver in the Polo was his ex-wife.

He said the woman’s colleagues had arrived at the scene after pictures and the video were widely circulated on social media. 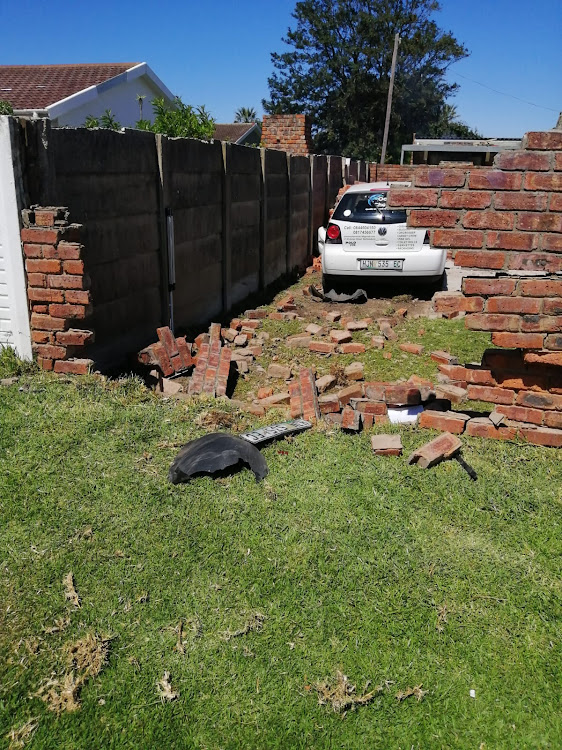 “They said she had left work in a rush, saying that she needed to attend to something at home, but when they recognised the car she was driving in the pictures circulating on Facebook, they were worried,” Sloti said.

“I was inside the house when I heard bricks [from the boundary wall] hit the [house] and I rushed out to find a car crashing into my pool with a man inside it,” Mongo said.

“The man managed to get out of the car, but we could tell he was still in shock.

“He didn’t say much except to confirm that his wife had hit his car from behind and he had lost control and crashed into my yard while she crashed into my neighbour’s yard,” Mongo said. 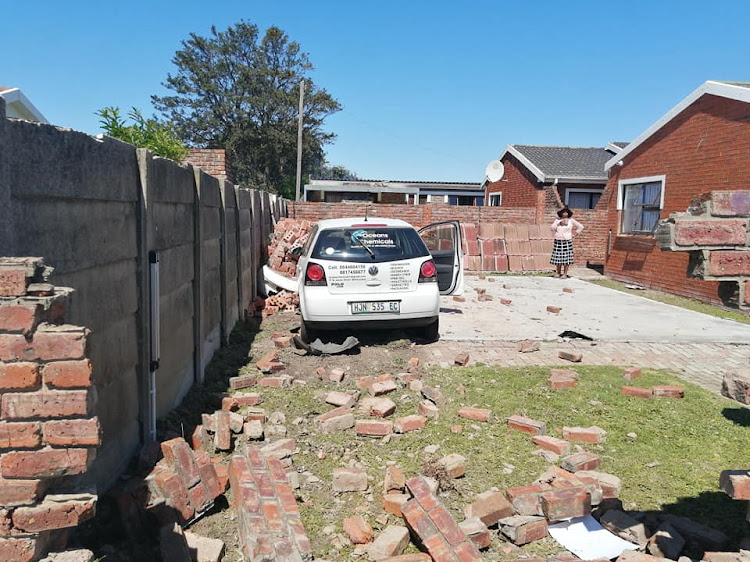 Two cars driven by an ex-husband and wife crashed into two neighbours' yards in Kabega Park on Monday. The ex-husband's car landed inside one of the neighbour's pool.
Image: PHILLIP WOLFSBURG/ PORT ELIZABETH TRAFFIC UPDATES

Jodash Pillay, who owns the Geely, said a relative had been driving it at the time of the accident.

He did not want to give the couple’s names.

He said the woman had been taken to Mercantile Hospital, while the man was a bit sore.

A 30-year-old man is in a stable condition at Tygerberg Hospital in Cape Town after his car plunged 200m down Bainskloof mountain pass.
News
1 year ago

Two people were killed and six others injured in an early morning crash in Durban on Friday.
News
1 year ago