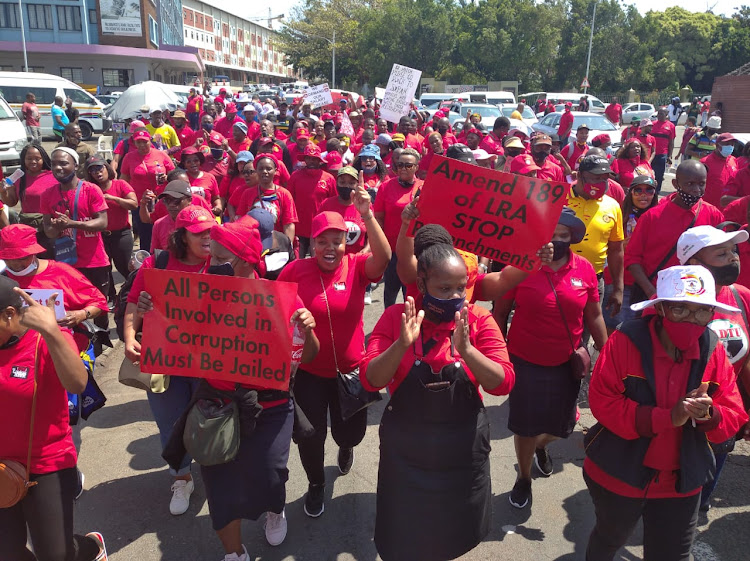 Traffic entering the KwaZulu-Natal city has been severely affected as hundreds of Cosatu members embark on a national strike against job losses, unemployment and corruption.

Cosatu provincial secretary Edwin Mkhize said members had embarked on a go-slow drive on the N2 from Port Shepstone, Tongaat and Pietermaritzburg.

"Workers are tired of the socio-economic conditions we face, namely poverty, inequality and unemployment. At least 42% of people in SA are unemployed - that is a crisis," he said.

Mkhize said Cosatu was even more outraged by corruption during the Covid-19 pandemic, saying this was tantamount to murder.

#CosatuNationalStrike KZN secretary Edwin Mkhize says hundreds of their members have conducted a go-slow on the N2 from Port Shepstone (south), Tongaat (north) and the N3 from PMB (west). They are all converging in Durban where they will bring the CBD to a standstill. @TimesLIVE pic.twitter.com/3EjshvIHhq

Cosatu also criticised what it described as "corruption by the private sector" regarding payments of the Covid-19 Temporary Employer/Employee Relief Scheme (Ters).

"Companies in the private sector did not want to assist workers with UIF payments during the lockdown. Some have claimed from the Unemployment [Insurance] Fund but have not released the money to workers. Some only released portions of the money to workers while others claimed despite the fact that they were operating during lockdown."

Mkhize said the Cosatu march was highlighting both government and private sector corruption.

"We are tackling corrupt government officials who are stealing money and corrupt  companies that have stolen workers' money," he said.

Mkhize said wage increases for public servants were also a matter of concern.

He said the government's inability to pay increases that were "collectively agreed on in 2018" was disrespectful to workers.

He lauded the recent high-profile arrests by the Hawks, but said actions must be extended beyond just government."

'Put all corrupt people behind bars'

"We have seen some high-ranking officials being arrested. We are happy with that. The Hawks must go beyond that and all those found to be corrupt must be put behind bars, not just public servants but also those who control the means of production, the private sector bosses," said Mkhize.

Cosatu's motorcade, which is expected to bring Durban to a "standstill", will convene at the police provincial headquarters where a memorandum of demands is expected to be delivered.

Police spokesperson Brig Jay Naicker confirmed that the N3 between Pinetown and the Pavilion Shopping Centre had been brought to a standstill due to slow-moving traffic.

Naicker said the N2 onramp to the N3, towards the CBD, had also been affected by the go-slow.

Lilian Ngoyi Street was awash in red on Wednesday morning when union members started their march from Burgers Park to the National Treasury in ...
News
1 year ago

Teachers, nurses and doctors are expected to join one-day walkout

Services such as health care and education are expected to be disrupted on Wednesday as public sector workers down tools and stay at home to protest ...
News
1 year ago

The Cosatu strike is about the continued salary disputes and socioeconomic issues including corruption and inequality.
News
1 year ago