The number of South Africans who have called the SA Depression and Anxiety helpline this year would fill far more than one FNB stadium said SADAG operations director Cassey Chambers ahead of World Mental Health Day on Saturday.

SADAG’s helpline call volumes have doubled to about 1,400 people a day since the coronavirus pandemic lockdown began in March.

The suicide helpline has seen a 63% increase with more than 65,000 people reaching out, she said.

In the last few weeks, he has started to see patients with “long-term consequences” from the pandemic in his practice and expects to see the fallout for months to come.

“They have problems with memory that they have never had before and peripheral neuropathies, nothing specific neurologically, as well as psychiatric [conditions] ... there are new cases and relapses.” 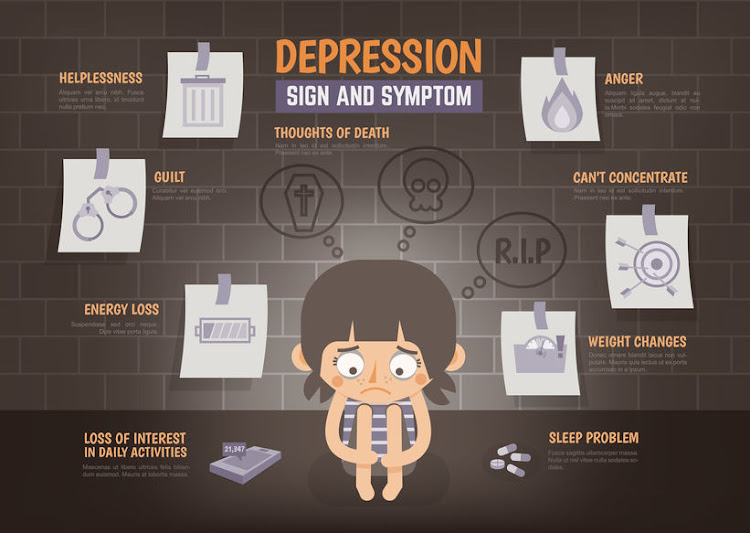 Korb raised concerns that patients on medicines were not getting them.

“Worldwide people have been stopping medicines and not renewing prescriptions,” he said.

“Even before lockdown, SA had stockouts of really important medications for chronic conditions like bipolar and depression,” he said, noting this was a problem in private and government health care.

Psychiatrist and chairperson of the SA Mental Health Alliance Dr Mvuyiso Talatala said about 5% of SA’s national health budget went to mental health (mostly for inpatient hospital care), roughly half of the recommended 10% by the World Health Organisation.

“Even that is not uniform across the provinces, some are less than 5%”, he said, noting this was the case in Limpopo and Mpumalanga, while the Western Cape spent the most with 7.7% of its health budget allocated to mental health. 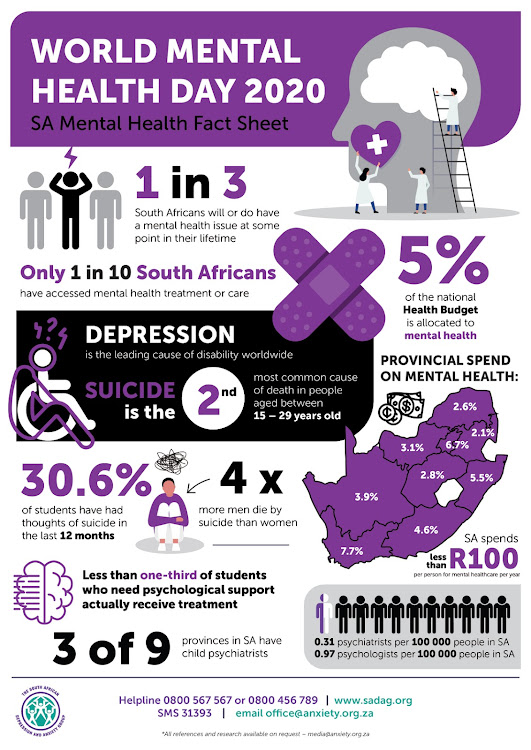 Talatala drew attention to the scarcity of mental health specialists in SA. Only three out of nine provinces had child psychiatrists, when children were among those most at risk — 300,000 people staying in Diepsloot, Soweto, do not have a single psychiatrist there.

“There is no western and African medicine ... just treatment,” he said. “My diary is booked for more than a month at a time.”

Clinical psychologist Zamo Mbele, who works in state and private practice, said that the stress on working parents and those caring for sick relatives has risen since the pandemic.

Recent US surveys had found a dramatic rise in suicide and psychiatric conditions, including depression, anxiety and stress, Korb reported.

SA has the sixth highest rate of suicide in Africa, said Sihaam Adam from Cipla SA, which co-hosted the SADAG and Cipla World Mental Health Day briefing this week.

• Where to seek help if you need it:

Katrien de Beer from Germiston is one of thousands of South Africans who benefited from the support and care that hospices and palliative care ...
News
1 year ago

From stress relief to weight loss, here are 10 health benefits of gardening

Anyone from a newbie gardener to a gardening guru can benefit from the calming effects of of mulching, potting, pruning or weeding
Lifestyle
1 year ago