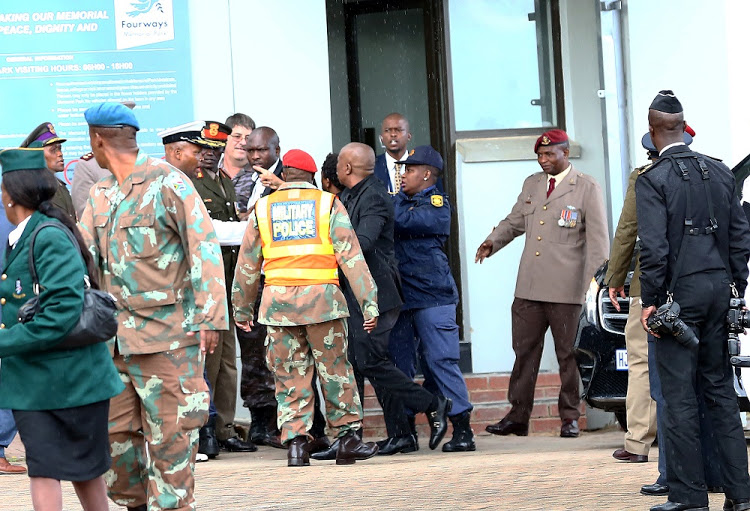 Police officer Johannes Jacobus Venter has told the Randburg magistrate's court that EFF leader Julius Malema and EFF MP Mbuyiseni Ndlozi pushed him so hard that he lost his balance.

Malema and Ndlozi are standing trial on a charge of common assault.

They are accused of assaulting the police colonel in 2018 at the funeral of struggle stalwart Winnie Madikizela-Mandela in Fourways.

They are both out on warning.

On Wednesday, Venter said he was responsible for protecting the president, former presidents and ministers at Madikizela-Mandela's burial.

He said they were instructed to only allow immediate family members and the president at the cemetery. He said they were told the rest of the mourners would remain at the stadium, where funeral proceedings would be streamed via satellite TV.

According to Venter, there was a motorcade led by the hearse and followed by the family, the head of state and previous heads of state and ministers.

A black Mercedes Veto emerged with Malema and Ndlozi as occupants, Venter said.

“I did not see any visible permit [on the vehicle]. It is normally placed on the left side of the window,” Venter said.

He said he did not recognise the driver but saw Malema.

“I greeted Mr Malema. I informed Mr Malema that the vehicle cannot enter but they were welcome to walk with the family members who had arrived with a bus.”

Venter said Malema told him that he would not walk to the cemetery but would drive in. He then told Malema he would have to first get permission from the venue operation centre.

Mr Malema said, 'No white man will stop me.' I was pushed towards the left side of the vehicle.

“While I was standing, I was pushed from the right-hand side,” Venter said.

He said he could not see who had pushed him, but when he turned around he saw Malema jump out of the vehicle.

“Mr Malema said, 'No white man will stop me.' I was pushed towards the left side of the vehicle.

“I moved back to the front part of the vehicle, where I was pushed by Mr Malema and Dr Ndlozi.”

He said Malema and Ndlozi pushed him for the second time.

“After I was pushed by Mr Malema and Dr Ndlozi, I saw them coming to me the second time. They pushed me very hard.”

Venter said at some stage Ndlozi and Malema drove into the cemetery. He did not know who had given them permission to enter the cemetery.

He told the court he did not retaliate when Malema and Ndlozi pushed him.

Ndlozi and Malema have pleaded not guilty to a charge of assault.

They said the charge was part of a political agenda.

Earlier, advocate Laurence Hodes said Malema and Ndlozi believed they were entitled to enter the cemetery and that their obstruction was illegal.

“They believe there is a political agenda. They have tried reached out to the complainant as a token of ubuntu, but it was rejected,” Hodes said.

Julius Malema and Mbuyiseni Ndlozi appeared again at the Randburg magistrate's court on October 28 2020. The pair face assault charges relating to an incident that took place at the funeral of struggle stalwart Winnie Madikizela-Mandela in 2018.

EFF leader Julius Malema said on Wednesday that a common assault case against him and party spokesperson Dr Mbuyiseni Ndlozi was 'useless' and a ...
News
2 years ago