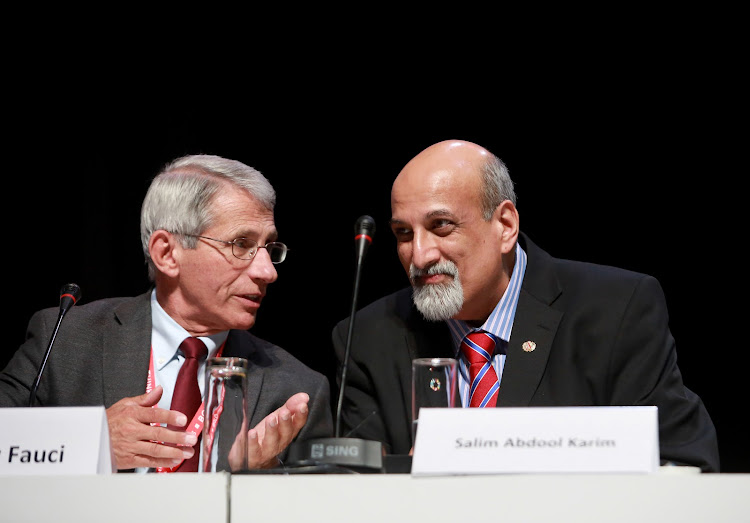 Prof Salim Abdool Karim, right, has been recgonised for going beyond the line of duty as a government adviser on health. He shares the John Maddox Prize 2020 with Anthony Fauci, left, director of the National Institute of Allergy and Infectious Diseases in the US.
Image: Supplied

Acclaimed international scientist and chairperson of the Covid-19 ministerial advisory committee, Prof Salim Abdool Karim, has won the prestigious John Maddox Prize 2020 for standing up for sound science in public.

The infectious diseases epidemiologist and director of the Centre for the Aids Programme of Research — together with Anthony Fauci, director of the National Institute of Allergy and Infectious Diseases (NIAID) in the US — were on Monday jointly recognised for going beyond the line of duty as government advisers on health.

The pair communicated the complex and changing science of Covid-19 to the public and policymakers, in the midst of international uncertainty and anxiety.

Now in ninth year, the John Maddox Prize, a joint initiative of the charity Sense about Science and the scientific journal Nature, received more than 100 nominations from 34 different countries.

“Anthony Fauci is receiving the prize in recognition of his work to help the public understand both the science behind complex and controversial public health issues and how the nature of science influences government responses. While other government scientists have avoided the spotlight, he has steadfastly responded to questions from the public,” said the award organisers ahead of the virtual prizegiving ceremony on Monday.

Close to 100 Covid-19 infections have been linked to the Ballito Rage festivities.
News
11 months ago

“In SA, Abdool Karim showed similar dedication. He has a reputation for clear and honest communication, something that has allowed him to generate public trust in fast-moving science. Respected for his international science advocacy, engaging with the media and the public has become integral to his role as a scientist.”

In April 2020, Abdool Karim appeared in more than 500 print, broadcast and online media items, as a trusted source of scientific information on the Covid-19 pandemic in the midst of uncertainty.

“He was instrumental in securing public understanding for the coronavirus response, which he achieved through his clear explanations of the rationale behind the approach through television, radio and print media.”

'A standard above and beyond'

Sense about Science director Tracey Brown OBE said the prize, by its nature, has typically focused on people who have not had recognition of their efforts to communicate science in difficult circumstances.

“This year the biggest scientific battles have been under a spotlight from politicians, the media and the public, so as judges our considerations were different. We have high expectations of people in public office, so we are recognising a standard above and beyond that.

“This crisis drew many advisers away into the corridors of decision making and official announcements. Instead, our joint winners took every opportunity to talk the public through uncertain and emerging science.”

President-elect Joe Biden has made his selections for two key public health positions, sources said on Sunday, as he prepares to take office next ...
News
11 months ago

Nature editor-in-chief Magdalena Skipper said this year has demonstrated how critical it is for everyone that science be communicated clearly and accurately.

“As many are confronted with confusing, contradictory and sometimes even false information, leaders who are able to convey the important messages clearly can literally mean the difference between life and death.

“The Maddox Prize serves an important purpose in recognising those who stand up for sound science and evidence. It is our pleasure to work with Sense about Science to recognise the roles that Anthony Fauci and Salim Abdool Karim have played in this pandemic and also that of the Aids crisis in the 1980s.”

Abdool Karim guided the public through the science of Aids during a time when those at odds with the government’s position were labelled enemies of the state. His bold stance for Aids treatment for the poor and vulnerable harnessed scientific research for social justice.

On receiving the award, Abdool Karim said: “I am deeply honoured to receive the 2020 John Maddox Prize for Standing up for Science, jointly with my colleague Dr Anthony Fauci. Providing scientific advice on Covid-19 in the midst of uncertainty and anxiety proved to be a difficult task, made more challenging by conspiracy theories.

“But I found that the task was made easier by staying true to the available scientific evidence without bending to ideology or vested interests. Serving the nation by promoting science, evidence and public discussion during two pandemics — Aids and Covid-19 — over the past 30 or so years has been a privilege for me.”

Microsoft founder Bill Gates has included South African professors Salim Abdool Karim and his wife Quarraisha on his heroes list for their role in ...
News
11 months ago

'We’ve got to control the virus where it is': Prof Salim Abdool Karim

Enforcing lockdown regulations already in place on social distancing and the wearing of masks will be critical to slowing the spread of Covid-19 in ...
News
11 months ago

This is not his first pandemic, but this time Salim Abdool Karim — one of the government’s chief advisers on the coronavirus — is giving counsel ...
Opinion & Analysis
1 year ago