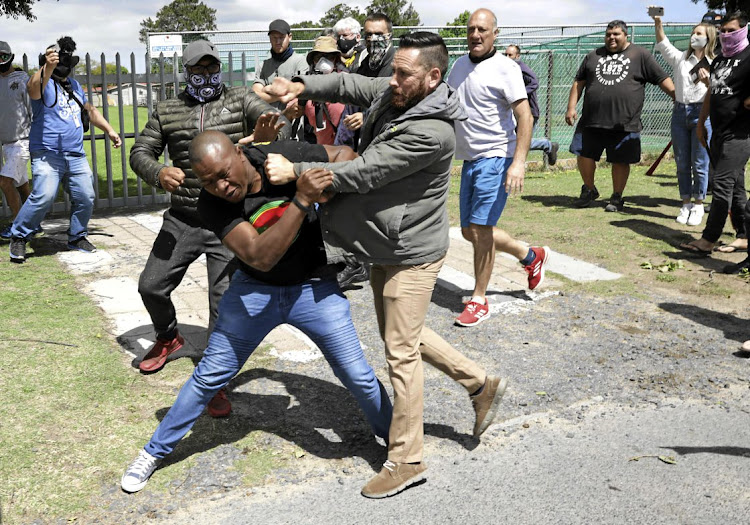 Parents and community members clash with EFF members at Brackenfell High School in November. The EFF was protesting against alleged racism at the school after a private party was attended by whites only.
Image: Esa Alexander

Brackenfell High School’s bid to ban the EFF from protesting outside its premises has failed. The high court in Cape Town dismissed the application on Wednesday.

The school launched the urgent application to interdict the EFF after the party announced that it would descend on the school en masse amid an uproar over a matric farewell party that was attended only by white pupils.

The school’s lawyers argued that the EFF advanced a false narrative for political purposes.

The school sought to interdict the EFF from staging demonstrations or gathering at the school, at large public access zones to the school and from making noise around the school.

Brackenfell High: investigation finds 'no evidence' pupils were excluded from matric bash on basis of race

An investigation into a matric farewell event organised for Brackenfell High School pupils has concluded it was a private function and did not ...
News
1 year ago

To bolster its case, the school’s lawyers in court papers included information gleaned from press statements which painted the party as violent.

But the EFF’s lawyers argued the evidence was not admissible.

Handing down judgment, judge Siraj Desai said the matter was moot since the matric exams had passed and any protest at the school would be meaningless.

Desai there was no direct evidence that showed that black pupils had actually been invited to the party. He said the school had only employed black teachers in 26 years and it had failed to “furnish any cogent explanation as to why it remains so unrepresentative of the racial demographics of society”.

Desai said the school had not convinced him to grant the interdict.

“The applicant may have been ill-advised to launch this application. In the result, the application is dismissed. There is no order as to cost,” he ruled.

Was Julius Malema right to threaten the police? Social media is split

Julius Malema's threats against the police have divided social media.
Politics
1 year ago

The city of Cape Town gave permission for 100 protesters to demonstrate in Brackenfell, but hundreds arrived.
News
1 year ago