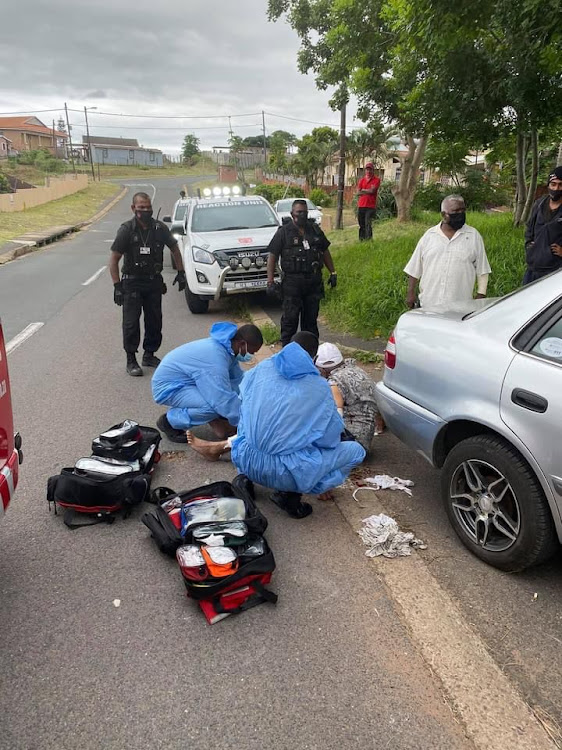 A pensioner receives medical assistance after being attacked by three dogs in Verulam on Monday.
Image: Supplied

A 79-year-old man was seriously injured after being attacked by two pit bulls and a boerboel in Verulam, north of Durban, on Monday.

According to private security company Reaction Unit SA (Rusa), the incident took place shortly after the man exited his vehicle and attempted to retrieve mail from cluster postboxes.

Rusa spokesperson Prem Balram said the dogs had escaped from their home a few metres away.

“A passer-by went to the man's aid and threw bricks at the dogs, which ended the attack.

“Neighbours alerted Rusa, requesting assistance for the elderly man, who was lying on the ground and bleeding profusely from his injuries.

“On arrival, paramedics treated the victim for several penetrating wounds before he was transported to a medical facility for further care.

“The owner of the dogs arrived on the scene and could not confirm as to how the pets had exited his property, which was surrounded by a boundary wall,” said Balram.

Residents live in fear of pitbulls after kid's death

It was barely five minutes after Nothemba Keke's four-year-old son Milani had jumped from her lap that she heard him screaming. A neighbour's ...
News
1 year ago

An elderly man tried in vain to tear their pit bull from his wife as it mauled her to death in Port Elizabeth on Monday night.
News
1 year ago

A 68-year-old Johannesburg man has been arrested for allegedly shooting a neighbour's dog several times.
News
1 year ago