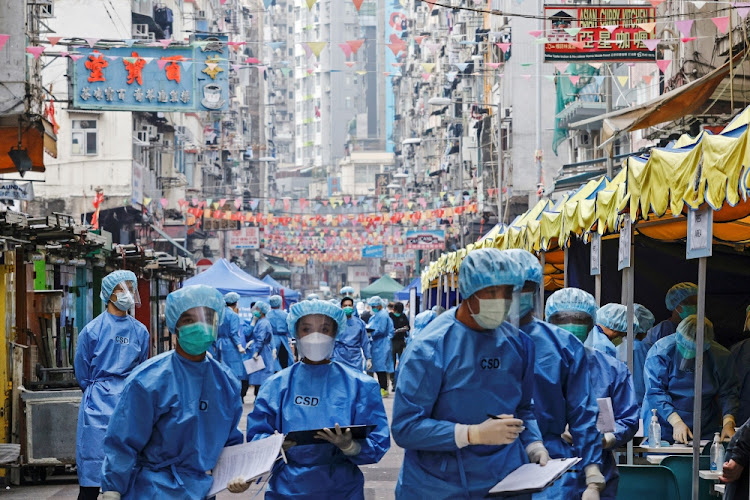 Health workers are seen in protective gear inside a locked down portion of the Jordan residential area to contain a new outbreak of the coronavirus disease in Hong Kong, China on January 23 2021.
Image: REUTERS/Tyrone Siu

On Saturday, the Eastern Cape became the first province to hit 10,000 deaths.

Zimbabwean President Emmerson Mnangagwa said there are no action heroes after four of his cabinet ministers succumbed to Covid-19 within a week.

In his state of the nation address on Saturday, Mnangagwa urged people to hang in there because, “government is engaging countries which have developed vaccines — help and relief are on the way”.

With annual inflation of 375% and a struggling local currency, the business sector has been badly affected by Covid-19 with little to no bailout from the government.

Larry King, who quizzed thousands of world leaders, politicians and entertainers for CNN and other news outlets in a career spanning more than six decades, has died at age 87, CNN reported on Saturday, citing a source close to the family.

King had been hospitalised in Los Angeles with a Covid-19 infection, according to several media reports. He had endured health problems for many years, including a near-fatal stroke in 2019 and diabetes.

He had been hospitalised at Cedars Sinai Medical Centre in Los Angeles for more than a week, CNN reported.

A group of British doctors have written to England's chief medical officer to tell him to cut the gap between doses of the Pfizer and BioNTech vaccine to six weeks from up to 12.

Britain is prioritising giving first doses of Covid-19 vaccine, allowing up to 12 weeks before a second dose, to give the maximum number of people some initial protection.

But Pfizer and BioNTech have warned they have no evidence their vaccine would continue to be protective if the second dose is given more than 21 days after the first.

Hong Kong's government locked down an area of Kowloon peninsula on Saturday, saying its 10,000 residents must stay home until all of them have been tested for the new coronavirus and results largely determined.

The government said there are 70 buildings in the "restricted area" of Jordan and that it aims to finish the process within about 48 hours, so that people can start getting to work on Monday.

Hong Kong authorities have taken aggressive measures to combat the Covid-19 pandemic in the Asian financial and airline hub, but Saturday's move is the first lockdown in the Chinese-ruled city.

China on Saturday reported a slight increase in new cases of Covid-19 as it marks the anniversary of the world's first coronavirus lockdown, in the city of Wuhan where the disease emerged in late 2019.

The National Health Commission said 107 new Covid-19 cases had been identified on Saturday, up from 103 cases the day before.

The commission said in a statement that 90 of the new cases were local infections.

The first case of the SA coronavirus variant was identified in Portugal on Friday, health institute Ricardo Jorge told Lusa news agency, as the country struggles to contain a crippling surge in cases partially blamed on the rapid spread of the British variant.

“We are undergoing due process to rapidly test and interrupt this potential chain of transmission,” the Ricardo Jorge Institute told Lusa. It did not say where in Portugal the strain was detected.

The country of 10 million people registered a record 234 coronavirus deaths and 13,987 deaths on Friday, and is currently reporting the highest seven-day rolling average of new cases and deaths per million worldwide according to ourworldindata.org.