End of an era: SA reminisces about Musica as popular chain closes down 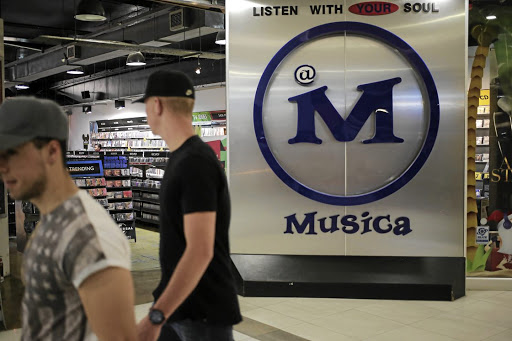 Musica has closed 19 stores since the start of its 2021 financial year.
Image: Arena File photo

Mzansi has reacted with sadness to the news that Musica will be shutting its doors after several years of decline.

On Thursday, TimesLIVE reported that the Clicks Group said it had decided to close Musica due to the shift to digital consumption of music, movies and games, worsened by the Covid-19 pandemic.

“Musica has been operating in a declining market for several years owing to the structural shift globally to the digital consumption of music, movies and games from the traditional physical format,” said Clicks Group.

“The inevitable demise of the brand has been accelerated by the Covid-19 pandemic, which resulted in the rapid decline in foot traffic in destination malls where Musica stores are typically located.”

Musica shuts its doors after 29 years

Clicks Group said on Thursday it had decided to close its Musica entertainment business due to the shift to digital consumption of music, movies and ...
News
1 year ago

Musica has closed 19 stores since the start of the 2021 financial year and is now trading from 59 outlets. The remaining stores will be closed as leases expire over the next four months.

On social media, many users shared their memories of the outlet that has been operating for 29 years. Other said they were not shocked about the closure because “the writing has been on the wall”.

R.I.P. Musica, shutting down after 29 years. Was my favorite store to buy TV series, movies and music albums. Some stores are still open for now, though once their leases expire, it's the end of an era. pic.twitter.com/hyRXuas1t5

Musica closing down? This one hits hard. The music store I’d go to as a kid to browse albums. They held us down for a long time, truly the end of an era

I will forever cherish the moments when I would save my lunch money so that I could go to musica after school for the R5 per 15 minutes listening sessions. I would listen to CD albums I couldn't afford the entire afternoon before I go home. End of an era indeed. https://t.co/fNdOXsWzL0

With Musica closing down, it's just another reminder that innovation will always give u something new to chew on. This was inevitable, intact it's long over due. The physical distribution setup never favoured the creatives anyway. Let's embrace the new age nd make it work for us.

I wanted to start a vinyl collection and their stores were convenient that’s the sad part about Musica closing down.

Musica stores are closing? 💔
Loved hanging out there as a kid and as an adult, I've also enjoyed buying CDs and DVDs there for my collection.
It's a shame.

Musica closing down is an example of our stores failing to re-invent. The writing has been on the wall. Many stores will fall soon due to lack of innovation. Consumer pattern has changed significantly.

CD store Musica is closing down? I was really angry until I remembered it’s not 2009.

Musica tota failed to rebrand . We’ve been having Bluetooth connections in cars for more than 10years now. Things have greatly changed. The closing was going to happen even without Corona tbh. It’s been long overdue.

Prince Kaybee will be revving his engine on Ignition TV.
TshisaLIVE
1 year ago

Kaylow on his spirituality being his 'sane place' & his upcoming tracks

'So, I believe that the angels that take care of me or guide me wouldn't do that if they didn't know me'
TshisaLIVE
1 year ago