While the list of countries South Africans are banned from travelling to continues to increase due to the Covid-19 variant 501Y.V2, there are nine countries Saffas can visit and possibly without the need to quarantine when they leave or return.

This is according to the travel website Skyscanner, which developed a new mapping tool showing Covid-19 travel restrictions in effect around the world.

The map, which takes data from the International Air Transport Association, shows South Africans are still allowed to travel to Ukraine, Afghanistan, the Central African Republic and Costa Rica, among others.

By comparison, 121 countries have “major restrictions” in place for South African travellers. This means the countries have suspended travel, may be closed to entry, or entry may only be possible if you are a citizen and/or meet strict entrance requirements.

The website show some countries have “moderate restrictions” in place for South African travellers, where travel is possible but only if travellers meet certain entry requirements which include taking a Covid-19 test. Travellers may also be required to quarantine upon arrival and/or return.

There are also nine countries whose restrictions are unknown and those include SA, West Sahara and Crimea. 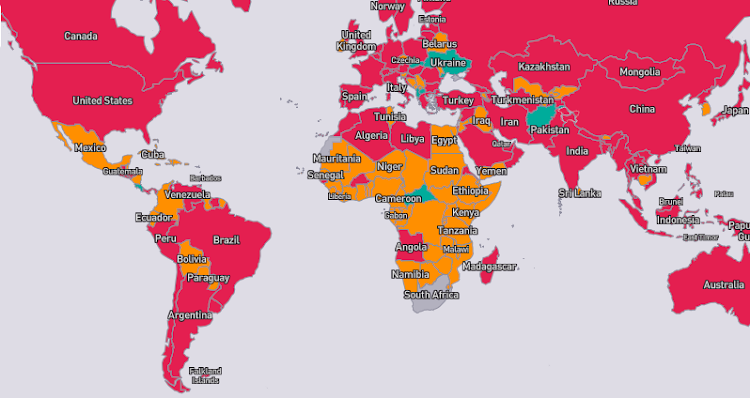 The map showing countries with restrictions on travellers from SA.
Image: Screenshot/Skyscanner

Countries where travellers from SA are banned

Earlier this year, US President Joe Biden imposed a travel ban on most non-US citizens entering the country who have been in SA, citing concerns around the 501Y.V2 variant.

Other countries from which travellers from SA have been banned since the discovery of 501Y.V2 include Vietnam, Israel and the UK, as well as the city of Dubai in the United Arab Emirates.

SA has been flagged as a risk by many European countries including Belgium, France, Germany and Switzerland.

The variant was first discovered in the Eastern Cape and was found to be more infectious than the original coronavirus. It has since been detected in more than 30 other countries.

Last month, co-chairperson of the ministerial advisory committee Prof Salim Abdool Karim pleaded with the world to stop labelling 501Y.V2 the “SA variant”, saying it was unjust and damaging.

“I should point out even though the virus in this particular variant was first described in SA, it might not have emanated from SA. It is inappropriate to call it a SA variant. It is better to call it by its name,” he said.

A South African business lobby group called on Monday for the government to shift the emphasis on its vaccine programme to target the elderly and ...
News
1 month ago

It's official! SA has sold its batch of AstraZeneca vaccines to the AU — Mkhize

The national health department on Sunday said the sale of the million AstraZeneca vaccine doses to the AU has been concluded.
News
1 month ago