Nearly 50 killed on KZN roads since start of Easter weekend 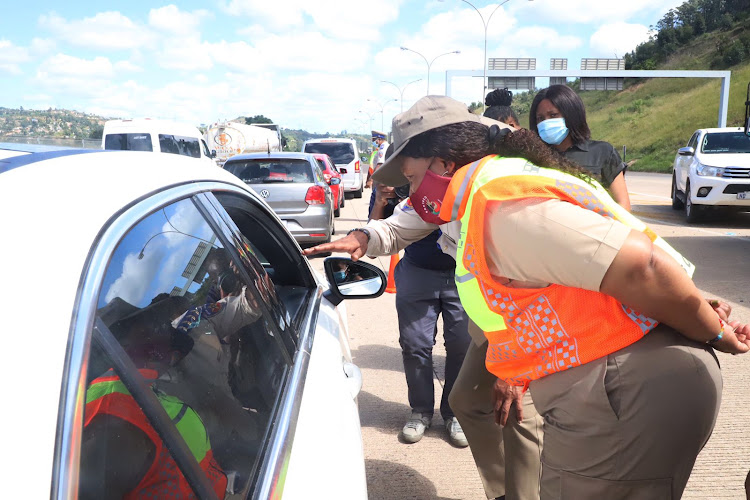 As thousands of holidaymakers left the province on Monday, transport, community safety and liaison MEC Peggy Nkonyeni revealed at a roadblock at the Mariannhill Toll Plaza, that there had been 37 fatal road crashes in KwaZulu-Natal since Thursday.
Image: supplied

Forty-seven people were killed in crashes on KwaZulu-Natal roads since the start of the Easter weekend.

As thousands of holidaymakers left the province on Monday, transport, community safety and liaison MEC Peggy Nkonyeni revealed at a roadblock at the Mariannhill Toll Plaza, that there had been 37 fatal road crashes since Thursday.

Nkonyeni said evidence showed that most road crashes were as a result of “human behaviour such as speeding, overloading and driving under the influence of alcohol”.

The motorist with the highest alcohol content, 2.68 mg/l, which is 11 times over the legal alcohol limit, was arrested in Scottburgh.

The highest speed recorded was on the N2 near Mtunzini in the Empangeni Region, where a motorist was caught driving at 170km/h in a 120 kilometre zone.

“Road fatalities are a major concern to the provincial government; however, it takes each individual to play their part in curbing the high rate of accidents that occur each year. No matter how many law enforcement officers we deploy, we can never be able to police every aspect of motorists’ behaviour, so this calls for us to individually take responsibility for our actions when we get behind the wheel.”

“We wish to express our deepest condolences to the families of the people who lost their lives in these horrific accidents over the past three days. We also wish those fighting for their lives in hospital a speedy recovery,” said Nkonyeni.

By noon on Monday more than 2,000 cars per hour passed through the Mariannhill Toll Plaza on the way out of the province.

Law enforcement officers were out in full force during the Easter period as part of Operation Vala Easter Safety Plan.

At least 14,739 vehicles were stopped at multidisciplinary roadblocks and other operations throughout the province.

Nkonyeni also appealed to pedestrians to avoid jaywalking on freeways.

“Integrated roadblocks will continue throughout the province targeting all degrees of crime including unroadworthy vehicles, overloading, distractive driving, drinking and driving and illegal drugs, among other violations,” she said.

The driver of a vehicle involved in a crash that claimed three lives allegedly fled the scene on the N2, north of Durban, on Easter Sunday.
News
9 months ago

Mom and 2 children among six dead in Welkom horror crash

Six people died after two vehicles collided on the R30 outside Welkom in the Free State on Sunday morning.
News
9 months ago