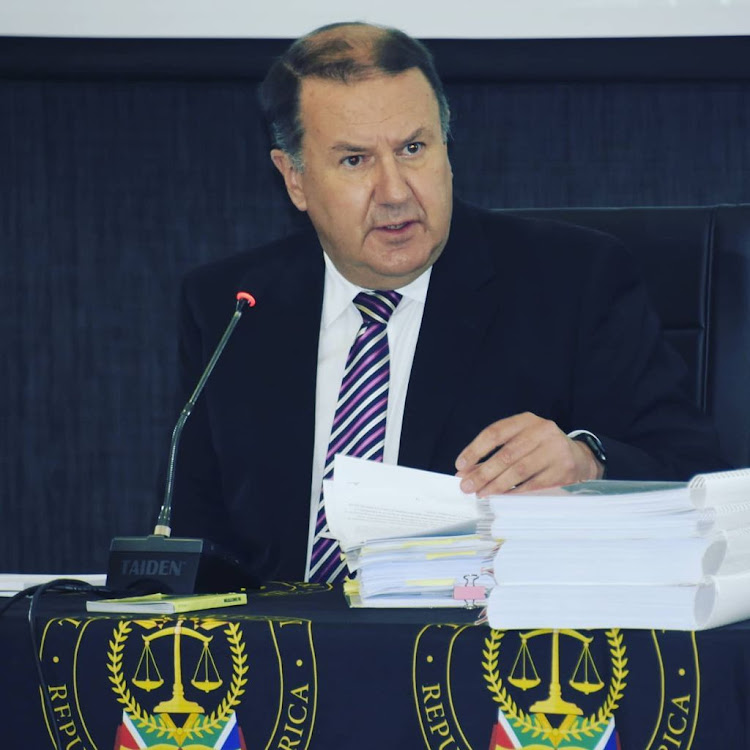 Chief justice Mogoeng Mogoeng lashed out at KwaZulu-Natal judge Piet Koen on Wednesday for being “rude and discourteous” to him at a meeting to discuss cost-cutting measures in the judiciary in 2016.

This caused him to question how Koen had become a judge, and how he treated others, he added.

At the end of his interview by the Judicial Service Commission (JSC) for a position on the Supreme Court of Appeal (SCA), he said the way Koen had addressed him at the meeting was a “cause of grave concern” and said it was “one of my worst experiences”.

“You were one of the leading voices in that meeting. It was one of the most unfortunate meetings a judge should ever have — and I am putting that in the lightest possible way.

“I left the meeting deeply concerned about how the judge president will ever be able to run a division like that. I was deeply concerned how you treat the advocates that appear before you — litigants and witnesses, and members of the public.

“I thought: how did he become a judge? A member of our office who is a white Afrikaner told me he was ashamed to be a white man. I told him you don’t have to be. You can come across as discourteous, regardless of colour.”

Koen, who has been a judge for 14 years and has completed several stints on the SCA,  explained that at that time there had been grumblings among judges about the cost cutting, which involved being limited to R900,000 for new cars, cutting back on travel and subsistence allowances, and not being able to take spouses on circuit.

He said while these issues did not affect him personally, some judges believed that it was infringing on their rights, laid out in the constitution, that judge’s salaries and other benefits may not be reduced.

While heads of court had agreed to “voluntary” cost cutting, it appeared that the office of the chief justice was enforcing it and this led to the meeting.

Mogoeng said he was not concerned about the merits or otherwise of the issue. “I am worried about discourtesy. You were extremely rude, it was completely unbefitting for a judge.”

Koen said he had read the transcript of the meeting. “I respectfully submit that contents thereof were not intended to be rude,” he said.

“But perception is important — and if it was construed as such, I am very saddened and I apologise unreservedly.”

The chief justice responded: “It is accepted.”

Eastern Cape High Court judge Johannes Eksteen says he has not experienced toxicity at the SCA, despite recurring allegations over the years.
News
1 year ago

Earlier, Durban high court judge Trevor Gorven was spared a grilling by the commission in his third attempt for permanent appointment to the SCA.

Court president Mandisa Maya said the evidence of his competence, commitment and congeniality were all on record through his service to the court as an almost permanent acting judge for more than three years.

However, Maya raised the issue of his age — Gorven is turning 67 next week.

Gorven said this meant he had extra experience, and having had time at the court already he could “hit the ground running”.

“In the more than three years left, I will be involved in about 180 judgments. There is still a lot to be achieved.”

He said there was an “experience gap” on the court, which he believed he could fill to allow others to “find their feet”.

On the issue of gender-based violence, he said he was aware that victims were not dealt with a great deal of compassion.

“I think courts can do better. There should be huge sensitivity to those victims who are suffering a second time when they come before the court and so often relive the trauma. It deepens the wounds. Courts need to be very sensitive and very welcoming of those people and their evidence.”

Public enterprises minister Pravin Gordhan has denied that he in any way sought to influence chief justice Mogoeng Mogoeng, “whose independence I ...
News
1 year ago

Asked at the Judicial Service Commission (JSC) whether his excellent education was the result of white privilege, Gauteng judge David Unterhalter ...
News
1 year ago