Victims assaulted with a hammer, knife and screwdriver 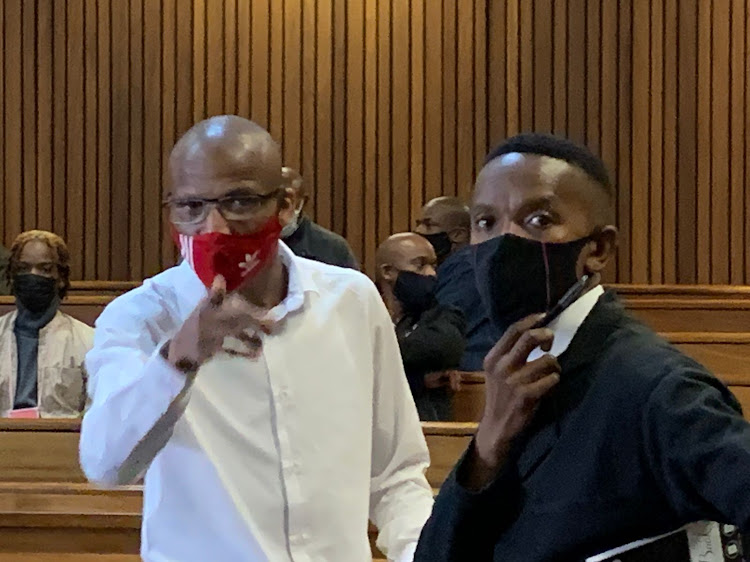 Sentencing of serial rapist Sello Abram Mapunya, who raped and robbed 56 women across Pretoria over a period of five years, has been postponed until Thursday.

Judge Papi Mosopa, reading out his verdict in the Pretoria high court on Wednesday, found Mapunya guilty of rape, robbery with aggravating circumstances and house- breaking.

Mapunya, who was charged with 101 different crimes, began his crime spree in 2014 by  attacking his victims — including a 14-year-old girl — in Tshwane’s suburbs of Silverton, Nellmapius, Atteridgeville, Mamelodi and Olievenhoutbosch.

Mapunya, dressed neatly in a cream shirt and brown trousers, sat rocking himself backwards and forwards as Mosopa delivered his judgment in a courtroom packed with victims and their families.

“The state has proved their case beyond a reasonable doubt on the evidence that was led,” said Mosopa. “These heinous crimes occurred in the sanctity of people's homes. Your client violated not just the victims but their husbands and children, who were forced to watch and endure the pain of their mothers and wives being raped.

“Looking at how many victims there are, would I be wrong in classifying your client as a serial rapist?”

"The sexual violence meted against women in this country is simply shameful," says police minister Bheki Cele.
News
1 year ago

This was the response by Mosopa to advocate Walter Rankapole, who argued for leniency in the sentencing of his client.

Mapunya, 33, had terrorised women and children from 2014 until his arrest in March 2019. He was found guilty of 41 rapes and 40 separate housebreakings and house robberies.

Mosopa handed down his verdict after Mapunya pleaded guilty on Monday at the start of his trial. He said Mapunya had attacked his victims, several of whom he raped multiple times, while armed with a firearm, hammer or screwdriver.

His youngest victim, who lived in Olievenhoutbosch, was 14.

“The heinousness of the crimes could not be disputed. One of the victims was 14 years old when she was attacked and raped. She was walking in the street with a friend, when she endured an unbearable trauma.

“The victims endured untold trauma when your client broke into their homes between 2am and 4am and attacked them. They were raped in  places where they thought they would be safe.

The offences were planned. The accused did not use protection [when raping his victims]. He committed these crimes in front of husbands and children. The violence was gratuitous.

“To this day, neither you nor your client can tell this court what motivated him to commit these heinous crimes, which saw the survivors assaulted with a hammer, knife and a screwdriver.”

In arguing for leniency, Rankapole said while the law called for the seriousness of the offence to be taken into account, the accused’s circumstances needed to also be considered.

“My client is a father ... [his family] survived on the work that he did, which was mainly piecemeal jobs, including transporting things for people.”

Mosopa responded that the seriousness of the crimes far outweighed Mapunya’s personal circumstances.

“You are the fourth lawyer for your client. This trial was meant to have begun in October 2020, but only started now because of repeated delays.

“Your client’s first lawyer spent months consulting with him in prison. In fact right up until the scheduled start of the trial the consultations happened. On the day the trial was meant to start Mapunya fired his first lawyer.

“Since then he has fired two other lawyers, apparently because of language issues. The consultations were done in English and Pedi. Until the start of the trial there were never any language issues reported to this court.”

“Therefore all should be accompanied by a life sentence.”

The defence argued that a life sentence for each of the rapes would be improper.

But the state submitted that the crimes had destroyed “lives and souls”.

“The offences were planned. The accused did not use protection [when raping his victims]. He committed these crimes in front of husbands and children. The violence was gratuitous,” argued prosecutor WP Coetzer.

“The accused only pleaded guilty when he realised the overwhelming evidence which was stacked against him. He is not remorseful.”

"Having had the experience of living with the person, I thought he was rehabilitated. But one morning he snapped and attacked us," says Bettina-Ann ...
News
11 months ago

A man arrested in connection with the rape and murder of his colleague's daughter has now been charged for the attempted rape of the little girl's ...
News
11 months ago

The alleged mastermind behind the murder of Tshegofatso Pule, Ntuthuko Shoba, will be detained at the Johannesburg Prison in a single cell.
News
11 months ago