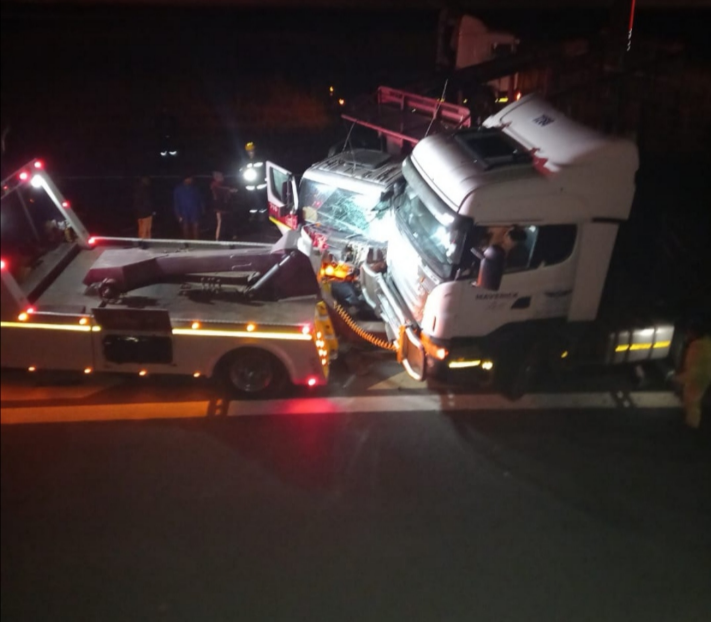 Two Durban tow truck operators were killed when a truck ploughed into them on Monday night while they were attending to a broken-down heavy-duty vehicle on the N2 freeway
Image: Emer-G-Med

Two tow truck operators, attending to a broken-down heavy-duty vehicle, were killed when a second truck mowed into them on the N2 freeway near Umhlanga, Durban, on Monday night.

Kyle van Reenen, spokesperson for Emer-G-Med, said the tragedy unfolded at around 10pm.

“Reports from the scene indicate that a heavy-duty vehicle had experienced mechanical failure and had broken down in the area.

“While a towing operator was in attendance, a second heavy-duty vehicle collided into them.

“Two males believed [to be] from the towing operation were found deceased at the scene.”

Van Reenen said a truck driver suffered moderate injuries, was stabilised at the scene and taken to hospital for further care.

“SAPS were on the scene and will be conducting further investigations.”

A bus veered off the roadway and rolled down an embankment in northern KwaZulu-Natal on Saturday morning, leaving one person dead and 50 injured.
News
11 months ago

Twelve people were injured, five of whom are in a serious condition, after a taxi crashed into a wall in Randburg, Johannesburg, on Sunday afternoon.
News
11 months ago