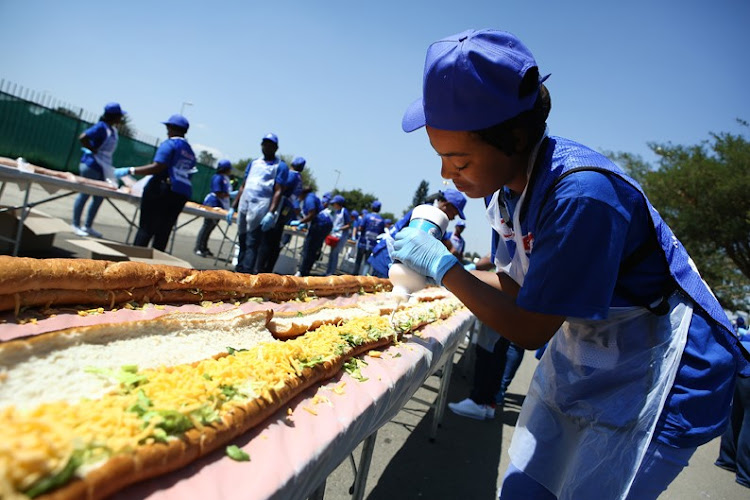 Clover employees at Maponya Mall in Soweto in 2018 when they set a new world record for the longest line of sandwiches. File image
Image: Phill Magakoe

North West premier Tebogo Job Mokgoro has dispatched a team led by agriculture and rural development MEC Desbo Mohono to meet the management of the dairy manufacturing company Clover in an effort to halt the looming relocation of the company to Durban.

Clover recently announced it intends to close down its plant in Lichtenburg under the Ditsobotla local municipality, citing disruptions to their operations caused by poor water and electricity supply. The company also indicated poor road infrastructure has increased operational costs and affected suppliers.

Clover has about 380 permanent and 40 temporary employees. It further employs about 20 general workers, 20 truck drivers and truck cleaners. Other employment opportunities emanate from enterprise development programmes such as subcontracting, said the premier’s office.

Mokgoro said the municipality cannot afford to lose the Clover operations as this will have devastating consequences for more than 300 families.

“Government depends on private companies which invest in our towns to create jobs. The closure of Clover will have a negative economic impact in the Ditsobotla local municipality. We are going to do everything in our power to save the more than 300 jobs,” he said.

The MEC visited the factory on Tuesday. The premier’s office said Mohono and the intervention team, which comprises two other MECs and municipal managers, will engage Clover top management as soon as possible to understand issues and find an amicable solution to the current situation.

The provision of services in the area is a serious problem, according to Sunday Times, as ANC factions fight for control of Ditsobotla local municipality. The town has two mayors, Tsholofelo Moreo and Tebogo Buthelezi, who belong to warring factions.

Mokgoro said: “Our responsibility as government, at any sphere, remains to create a conducive environment for businesses to flourish. In this instance we have neglected this key responsibility, hence Clover intends to close shop in the municipality. We need to find ourselves and meet the needs of businesses if we are to grow our local economies and create more jobs.”

“The closure of the plant will ultimately also have an impact on local farmers.”

Clover said poor service delivery has left it with no choice but to move the factory, which is the biggest in SA, more than 780km to KwaZulu-Natal.
News
1 year ago

Water authority Sedibeng Water has taken aim at a North West district municipality, saying it was suspending all "operations and maintenance ...
News
1 year ago