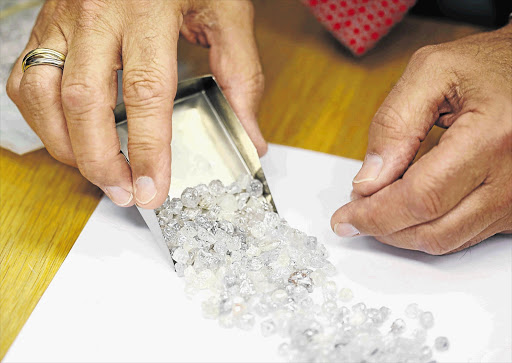 Geological and mining experts will be dispatched to KwaHlathi outside Ladysmith, where throngs of people have gathered in the belief they have found diamonds.
Image: REUTERS

Geological and mining experts will be dispatched to KwaHlathi outside Ladysmith, where throngs of people have gathered in the belief they have found diamonds.

While some believe it may be quartz crystals, others think they have discovered the precious stone. Images and videos are circulating on social media where some involved in the illegal mining are seen celebrating in belief that they have struck it rich.

The KwaZulu-Natal government said as soon as it was alerted to this, its officials contacted the national department of minerals and energy, which has promised to dispatch teams to the site.

These teams include the department’s enforcement and compliance unit to conduct an inspection of the site, as well as from Mintek (the Council for Mineral Technology) and the Council for Geoscience.

“The Mintek and GCS teams will include a geologist and will focus on establishing what exactly are these items that have been discovered at KwaHlathi,” said the provincial government.

“We are deeply concerned about the images showing that some people coming from as far as some of the neighbouring provinces and towns are flocking into KwaHlathi. We are worried that if not brought under control the situation could result in chaos and a possible stampede. We call for order and calm and urge all those involved to cease their operations and vacate the site so as to allow the DMRE to conduct a proper inspection of the site and of what has been discovered there,” premier Sihle Zikalala said.

The premier added that the illegal mining activities could be in violation of the Covid-19 regulations.

“It is also very concerning that in the wake of a looming third wave we have so many people gathered in one spot, not maintaining social distancing and also not wearing masks. This could prove to be a super-spreader and might put at risk many people including those who are not part of the mining,” he said.

The provincial government said it would work closely with the SAPS, the DMRE, the traditional communities, traditional leadership and the local and district municipalities “to bring calm to the area and to ensure that the relevant information filters through to community members”.

People are literally picking up diamonds from the ground in KZN, Ladysmith, KwaHlathi. pic.twitter.com/EK2GYig3AR

An illegal gold miner who was severely injured in a clash in which four other illegal miners were killed has been charged for their murders, ...
News
11 months ago

Two weeks ago, David Watkins noticed that his lawn appeared to be sagging beneath his pool house. He poked the soil with his finger and his entire ...
News
1 year ago

Bring on the millions! Rare blue diamond from Cullinan mine set to go on auction in July

A rare 39.34 carat Type IIb blue diamond recovered at Petra Diamonds' Cullinan Diamond Mine is set to go on auction in July.
News
11 months ago