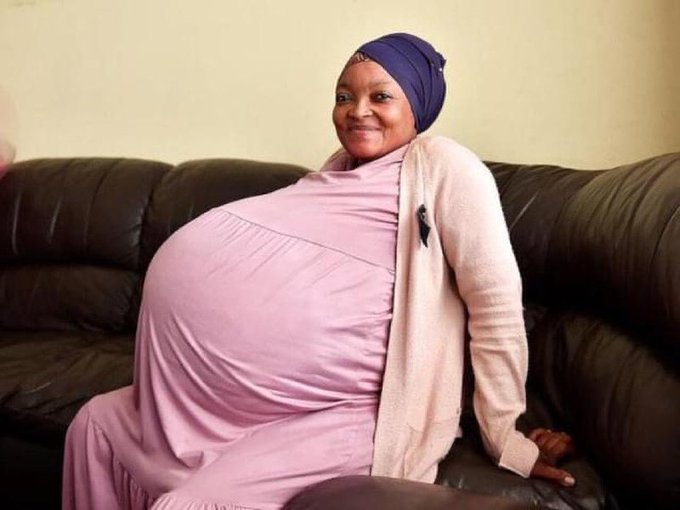 Pretoria News editor Piet Rampedi and Independent Media were heavily criticised for reporting that Gosiame Sithole, pictured, had given birth to 10 babies. After initially 'doubling down' on the story, Rampedi has now apologised.
Image: Twitter

Pretoria News editor Piet Rampedi has apologised to his colleagues for the damage his story on SA’s so-called “Thembisa 10” babies did to Independent Media’s reputation.

Two weeks ago, Rampedi broke the “story” of how Gosiame Sithole had “given birth to 10 babies at a Pretoria hospital”. But almost immediately suspicions were raised as health officials in Gauteng said they were unable to verify or confirm the births, which would have been a world record.

In the interim, the publication — and its online platform IOL — doubled down on the story, continuing to profess its accuracy and, at one stage, saying that health authorities were part of a cover-up.

In a letter to Independent Media’s editor-in-chief Aneez Salie, Rampedi apologises for how the story was handled — but also accuses other media houses and journalists of scrutinising the story simply because he wrote it and because it was published by an Independent group title.

Listen to the full letter here:

“I am writing to you full of sadness and regret about how the decuplets story, which I authored on June 8 2021 was handled, and the obvious affect it had on the company’s reputation,” he starts his email to Salie.

“Let me start by stating from the onset that I stand by the fact that Gosiame Sithole was pregnant, and that she did give birth. I don’t doubt it and never have.

“Be that as it may, I am sorry for the reputational damage the aftermath of the story has caused for the group, the company and my colleagues in general. I am fully aware that the story, and the general response, put all my colleagues in an awkward position, and under immense public pressure,” he added.

Rampedi continues that the story “provided detractors with an opportunity to cast aspersions on the professional integrity of not only myself but also my colleagues in the group”.

“For that, I am extremely sorry. It was unfortunate. And I would like to apologise to you, my colleagues and the group,” he wrote.

Rampedi also acknowledged that he could have — and should have — handled the story better and differently.

“Even though I stand by the fact that Sithole was pregnant, some aspects of the story could have been dealt with differently. Could I have handled the story far much better? Definitely! Especially the verification process. Quite honestly, I never treated the decuplets story as an investigation at all. I used no investigative tool or checklist.

“From the beginning, I saw it as a feel-good story for SA. I treated it as a piece that would celebrate a woman who gave birth to eight babies at the same time, breaking all sorts of records, and putting the country on the map.

“I trusted the sources, because I got to know them over a period of several months. They had no reason to lie to me about the pregnancy. For me, it was a story of celebration.

“Hence I never demanded documentary proof of the pregnancy, such as scanners and clinic cards, for instance, as I would normally do with an investigative story. There was nothing to investigate, I thought.

“However, judging by the sudden turn of events, and the reaction from the government and our detractors, I was wrong. It was not necessarily a feel-good story. It was an investigative story and ought to have been treated as such,” he said.

He continues that he was “blocked from getting the necessary documentary evidence” by the time he had to give the story the same scrutiny he would give an investigation.

“I am not sure whether it’s because the story had my name on it, and was associated with my paper. However, what was supposed to be a feel-good story was analysed using the checklist of investigative journalism and used to cast aspersions on all of us.

“It seems the reaction was more about how some of my mainstream media colleagues felt about me rather than the story itself. I doubt the reaction, and the level of sustained attacks on the group, would have been the same had the story been authored by someone else even from within Independent Media,” he said.

Rampedi also admitted that he should have “involved more people in the group” and, perhaps, “shouldn't have written the story myself” — though he said that the family rejected the idea “out of hand” that another journalist do the story.

Independent Media on Wednesday launched a scathing attack on Gauteng health officials, accusing them of a "cover-up of mammoth proportions" in the ...
News
1 year ago

"The failure of Piet Rampedi and Independent Media to do basic fact-checking and verify grandiose statements before publication has undermined and ...
News
1 year ago

The mother of SA's alleged “Thembisa 10" decuplets, Gosiame Sithole, has accused the family of the children's dad of wanting to benefit financially ...
News
1 year ago

"We’ve found the family and we are informed the babies are well," Ekurhuleni mayor Mzwandile Masina tweeted on Wednesday.
News
1 year ago