Looting and violence blew up around KZN on July 9 2021 and the situation became even more explosive at the weekend. Protesters continued to loot shopping centres and blockade roads on the morning of July 12. Some were seen walking off with appliances, including TVs and washing machines, and trolleys filled to the brim.

As gunshots and explosions rang out when looting and mayhem continued in many parts KwaZulu-Natal on Monday morning, major routes were closed to traffic, Durban's public transport system was not operating and even funerals had been put on hold.

Protesters continued to loot shopping centres on Monday morning.  Some were seen walking off with appliances, including TVs and washing machines, and trolleys filled to the brim.

Reports from Pietermaritzburg indicated that Brookside Mall was on fire. 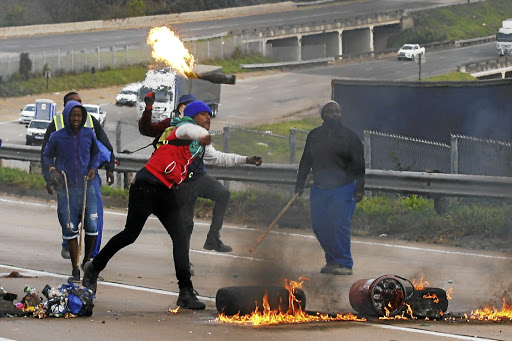 Zuma supporters block the N3 at Peacevale, on the outskirts of Durban at the weekend, as violence erupted over the jailing of former president Jacob Zuma. Violent protests have spread to other areas.
Image: Reuters/Rogan Ward

Police and private security companies battled to disperse protesters from Friday when the protest action, themed #FreeJacobZuma and #KZNShutdown on social media, saw violence erupting across the province. It has since spread to Gauteng.

On Sunday night, as shops were looted in the Durban city centre, Tongaat, Verulam, Amanzimtoti, Springfield and Overport, the eThekwini Municipality announced that its bus service would not be in operation on Monday.

“This is as a result of the current civil unrest. In addition to the bus service, residents can expect other service delivery interruptions over the next few days. While the municipality remains committed to minimising the interruptions, the safety of employees and municipal assets remains paramount,” it said.

The South African National Taxi Council (Santaco) in KZN said taxis would not be operating.

“This in protection of the same taxis that may be damaged.”

The entire N3 Toll Route, in both directions, from Harrismith in the Free State to Cedara in KwaZulu-Natal, was closed to traffic as “a result of the current spate of uncontrollable violent attacks on road users, trucks, security and emergency services and businesses”.

Violent protests kicked off around Gauteng on July 11 2021 resulting in torched vehicles, burnt buildings and clashes with police. Jeppestown was hit hard by protesters allegedly in response to the former president Jacob Zuma’s arrest on July 7 2021.

It advised all vehicles to immediately return to the nearest place of safety and remain there until further notice.

Clare Estate Umgeni Hindu Crematorium Society, which operates the busiest crematorium in Durban, said no funerals would be conducted on Monday due to the protests and violence.

The transport business in SA is “a business that only brings tears and more tears”, says Road Freight Association CEO Gavin Kelly after riots in ...
News
10 months ago

"Conservative estimates" are that the damage to private and public property in the province is at approximately R100m, but this could increase as ...
Politics
10 months ago

Violent riots erupted in Jeppestown and other parts of Johannesburg on Sunday.
News
10 months ago