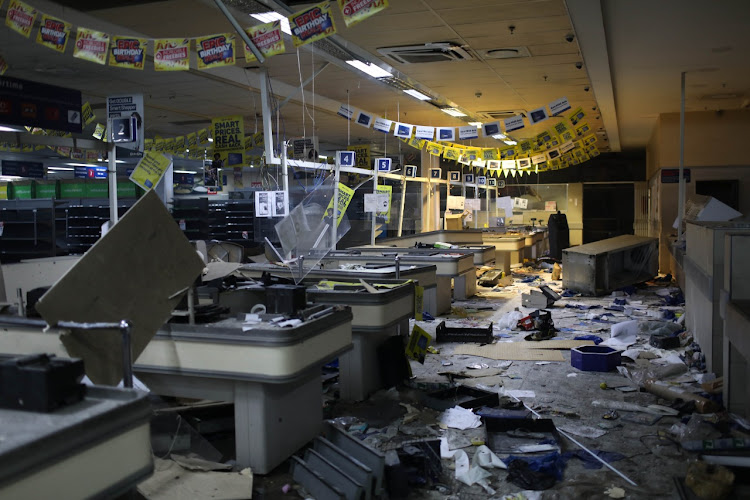 While Sasria has re-insurance cover that runs into the high single digits and can fund up to R10bn of claims from its own balance sheet, it only covers customers up to a threshold of R500m. In view: Extensive damage to shops in Alexandra, Johannesburg.
Image: Alaister Russell/The Sunday Times

Claims for damage and theft from businesses affected by civil unrest in SA are likely to be between R7bn and R10bn, the head of the only insurer covering political violence in the country told Reuters.

Days of riots and looting have left more than 70 people dead, hurt thousands of businesses and damaged major infrastructure in some of the worst civil unrest in decades.

Triggered by the jailing of ex-president Jacob Zuma last week after he failed to appear at a corruption inquiry, it has widened into an outpouring of anger over poverty and inequality.

Sasria, a state-owned insurer set up after private firms stopped underwriting risks relating to political violence due to unrest during apartheid, has received around R100m in claims so far, its MD Cedric Masondo told Reuters, adding this was expected to rise significantly.

The company, the only insurer to offer cover for such risks, expects total claims of up to R10bn, or R12bn in a worst-case scenario — making the unrest likely the most significant event in terms of the value of claims since Sasria was set up in 1974, Masondo continued.

“This is the worst in terms of financial magnitude,” he said.

Masondo said while Sasria has reinsurance cover that runs into the high single digits and can fund up to R10bn of claims from its own balance sheet, it only covers customers up to a threshold of R500m.

This will mean smaller firms will likely see their losses insured in full, while major companies that have suffered significant damage are likely to have to shoulder some of the cost themselves.

Some 40,000 firms have been affected in the eThekwini municipality in the province of KwaZulu-Natal alone, with damages in the area put at R15bn, according to its mayor.

Violence has been concentrated in KwaZulu-Natal, Zuma's homeland, as well as the country's economic and financial centre of Johannesburg and surrounding areas in Gauteng.

Businesses and homeowners who have Sasria cover will have their legitimate claims met, and in the case of smaller claims, they will be paid out ...
News
11 months ago

Defence minister Nosiviwe Mapisa-Nqakula has admitted that the country's security agencies were caught napping with regards to the looting of ...
Politics
11 months ago