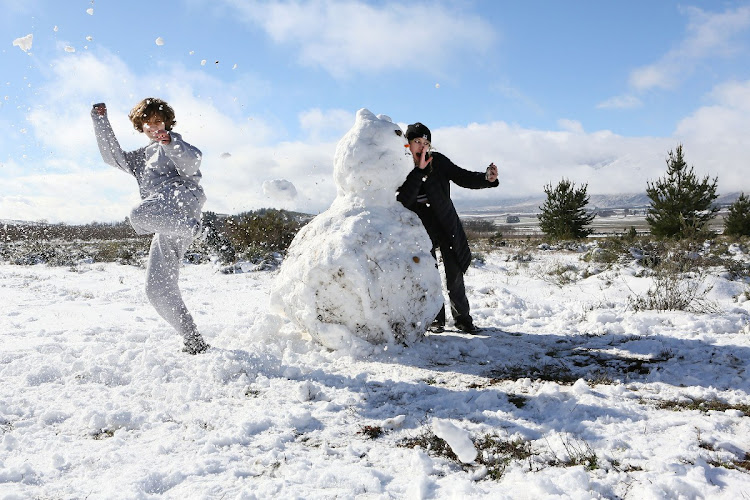 Mira and Isabella Boshoff play in the snow in the Matroosberg on July 13 2021.
Image: Ruvan Boshoff

Snow is expected to fall over the high-lying areas of the Western Cape, Eastern Cape and Drakensberg this week, with minimum temperatures below zero in the country’s interior regions.

Residents of Gauteng, the Northern Cape and Free State can expect maximum temperatures of 10 to 12 °C from Wednesday night accompanied by an icy south-easterly wind and clear skies.

SA Weather Service forecasters said on Sunday that the south coast of SA would get a taste of things to come on Monday when they felt the cold shoulder of a winter cold front brushing by the southern edge of the country.

A forecaster told TimesLIVE that the weather service would issue a yellow warning on Monday for residents along the Garden Route, where downpours could lead to flooding.

Isolated showers were also expected over the Western Cape on Monday and Tuesday.

A high-pressure system, which is after Monday’s cold front, is expected to make landfall on Wednesday and bring rain and snow.

By Wednesday, temperatures will drop significantly over the west and southwest of the country and by that afternoon the cold will move into the interior of the country when snowfall is also expected to reach the Drakensburg.

The forecaster said Thursday was expected to be very cold over most of the country, except for the Limpopo highveld. Temperatures are only expected to pick up again on Saturday.

Heavy rain and once-in-a-generation floods on Wednesday night caused the collapse of six houses in Germany's western state of Rhineland-Palatinate, ...
News
10 months ago

Gathered under the hot sun, dozens of women danced and sang in jubilation as children from the village of Salima, in central Malawi, started their ...
News
10 months ago

Taking international holidays continues to be complicated thanks to Covid-19. Luckily our country boasts beautiful places that can easily rival ...
Lifestyle
10 months ago