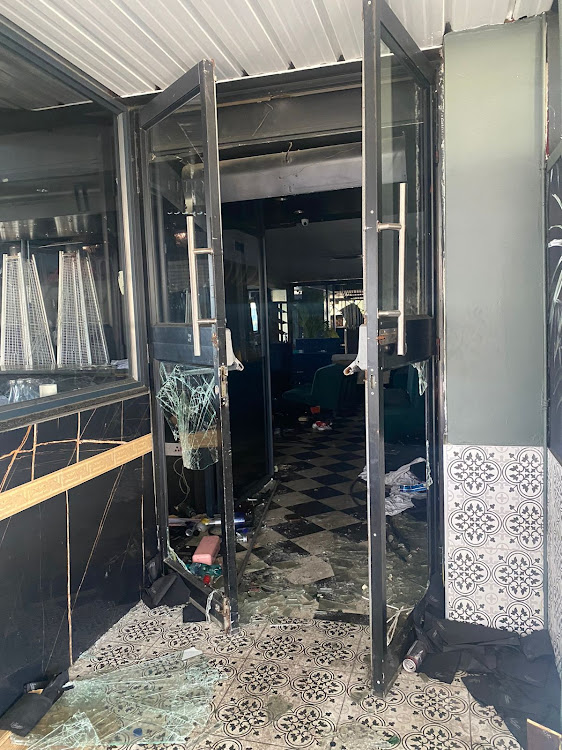 Kgolo Mthembu, owner of a lounge and restaurant in Umgeni Junction, KZN, says the looting went on for three days.
Image: Supplied

“I started from nothing, that is my testimony. It’s been very hard because I have no-one to turn to. If I don’t get support, it’s over,” says Kgolo Mthembu, whose champagne and cigar lounge and restaurant have been decimated by looters.

Liquor outlets were targets of looting and rioting in KwaZulu-Natal and Gauteng two weeks ago, which occurred during the Covid-19 lockdown booze ban, so while some celebrate an easing of the alcohol regulations from Monday, others are counting their losses.

Mthembu, operating in Umngeni Junction, north of Durban, said his losses amount to more than R5m.

The looting went on for three days at his restaurant.

“We are still assessing the damage but we have counted more than R5m lost in stock, damage and everything else. We are still putting together a schedule to get us the specific amount,” he said.

The 39-year-old said his imported champagne and expensive local brands was all looted. But that wasn't all.

“It was a horrific experience, I didn’t expect the damage to be so extreme — whereby you are stealing stock but furthermore are damaging the property and even stealing things that I never thought could be stolen — such as the copper in an air conditioner. It’s like they were vandalising the space more than looting,” he said.

Former Orlando Pirates star Lucky Lekgwathi said on Tuesday some of the looters who destroyed his Grootman restaurant in Kliptown, Soweto were his ...
News
6 months ago

Mthembu said he was in a meeting that Monday at one of his premises when his manager told him that an alarm had gone off.

“When I checked the cameras, I saw guys there in the shop, so I called the head of security and I asked him to meet me and we went to the shop and we found some police vans outside, so he went in and found the guys, told them to lie down because he was armed. The police helped us to make sure they lie down too.

“The problem was that there was no van to take them, not even enough handcuffs.

“Outside there were a lot of people trying to loot, throwing bricks and we don’t know what else. The police said they didn’t have the capacity, so they thought the best thing was to escort us to our cars so that we can leave,” he said. Mthembu said he thought the looters were done on Monday, but the looting spree continued.

“The following day when I went to check up, I saw more things were taken. The way I saw it, the first guys were looking for more of precious things, they went for the safe, stock, TVs,” he said.

Outside there were a lot of people, thousands of people outside the premises trying to loot all over the complex.

He despaired that they were unable to stop the destruction.

“On the first day we got there, we caught a couple of them — but because we were so overwhelmed, there were so many people out there, even when we called the police, they said they did not have a van. So I caught more than 20 people, we had to let them go because outside there was a lot of people, like thousands of people outside the premises trying to loot all over the complex. It wasn’t safe, I had to leave the premises,” he said.

He said the police were overwhelmed and had no capacity to arrest the looters.

“I was so disappointed. When I called my head of security, he told me that in the area that he lives in, they were also trying to loot, so he was protecting their houses.

“On Tuesday, I didn’t have security. On Wednesday, I got there and more things were gone. It’s like a pain that never ends.

“On Wednesday, I decided that police can’t help me, and there were no soldiers, so I told my landlord we needed more security. And we got security, that is when things started to be more stable.”

Mthembu said the looters had failed to steal his geyser and tried to come back for it on Thursday and Friday, but failed.

“It’s like a pain that doesn’t stop, every time you go, there is something more [stolen]," he said.

He said more than 80 jobs are at stake.

“If insurance doesn’t pay, I am out of business, we are talking over 80 people who are going to be at home for months with no jobs. I fear I won’t survive.”

They claim to care about the poor. They don’t. They want to loot, oppress and get away with it
Opinion & Analysis
5 months ago