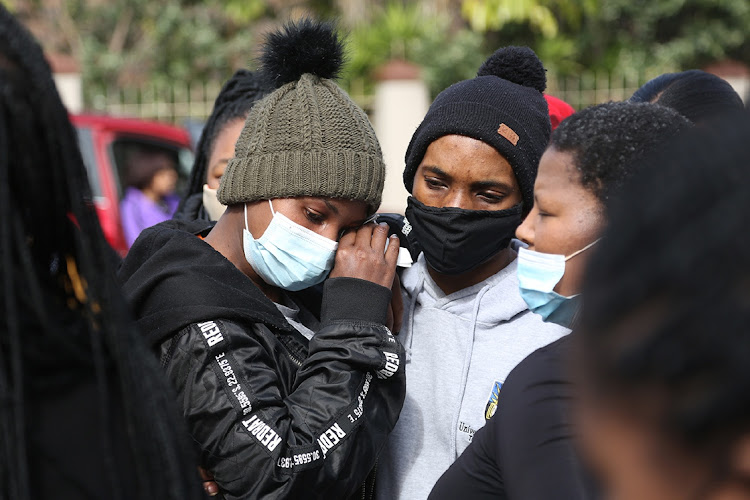 University of Fort Hare students Ruth Williams and Siyabulela Gamnca, who were friends of murdered Nosicelo Mtebeni, in Quigney to call for action against gender-based violence.
Image: MARK ANDREWS

Higher education minister Blade Nzimande has expressed sadness at the brutal killing of Nosicelo Mtebeni, 23, a fourth-year LLB student at the University of Fort Hare.

Mtebeni’s body was found dismembered in a suitcase in the suburb of Quigney in East London on Thursday.

It is alleged that Mtebeni was killed by her boyfriend, who has since been arrested. He is expected to appear in court on Monday.

“I denounce such barbaric and shameful acts committed against women, both in our institutions of learning and in society in general,” Nzimande said.

He said what was saddening was that such a gruesome act was committed in a month in which SA marked and celebrate Women’s Month.

Nzimande said he trusted the criminal justice system will ensure a speedy prosecution for the accused.

Nzimande said his department has mandated the Higher Health — an entity of the department which is responsible for implementing programmes against gender-based violence in university and TVET college campuses — to work together with the University of Fort Hare to provide psychological support to students and all affected parties.

Fort Hare vice-chancellor Prof Sakhela Buhlungu also expressed sadness at the death of Mtebeni, from Matatiele. She stayed in a private accommodation in East London which is not under the university's control.

“I stand here ... to condemn the brutality of the student's death. Nobody deserves to die, more so nobody deserves to die in this horrific manner. There is something so wrong about our society,” Buhlungu said in a video address to announce her death.

Crime stats: More than 10,000 people raped between April and June

Law enforcement officials need to do more to ensure the safety of everyone in the country, police minister Bheki Cele said on Friday while revealing ...
News
9 months ago

An alert detective outsmarted a murder suspect who tried to escape from a crime scene by hitching a lift.
News
9 months ago

The body of a woman was found partially burnt and half naked in bushes outside Polokwane in Limpopo, police said on Friday.
News
9 months ago