‘He will never be OK again’: 7-year battle to prove his innocence in Senzo Meyiwa’s murder

'People see him as Senzo Meyiwa’s killer even if he tells people he knows nothing about it. This case is about making the state take responsibility for what they did," says Zamokuhle Mbatha's lawyer Mxolisi Ndwandwe.
Image: Via Instagram

The life of Zamokhule Mbatha, the man initially arrested in connection with the murder of Bafana Bafana captain Senzo Meyiwa, has been ripped apart and will never be the same, his lawyer says.

The then-dreadlocked Mbatha was arrested shortly after the October 26 2014 fatal shooting of Meyiwa in Vosloorus, east of Johannesburg.

In mid-November 2015, the Boksburg magistrate’s court confirmed all charges against Mbatha had been dropped and he was a free man. This after the state confirmed it did not have enough evidence to link him to the crime.

People think because he has a good attorney, his family have money. He and his family are poor and are struggling.

Five suspects — Muzikawulahlelwa Sibiya, Bongani Ntanzi, Mthobisi Mncube, Mthokosizeni Maphisa and Fisokuhle Ntuli — are due to appear in the Johannesburg High Court sitting in the Palm Ridge magistrate’s court on Monday, just a day shy of the seventh anniversary of the Bafana Bafana and Orlando Pirates goalkeeper’s murder.

Mbatha’s life, according to his lawyer Mxolisi Ndwandwe, has been “turned totally upside down, thanks to the state.

“For years we have been battling the state. That battle has compounded the conditions of Zamokhule’s life.”

The battle has been to get the state to court, to submit documents and to commit itself to the civil trial for the law suit Mbatha has brought against the police minister and police for his wrongful arrest.

Ndwandwe, who refused to divulge how much Mbatha was demanding from the state for defamation and wrongful arrest, said: “It has been very difficult for us to finalise the matter.

“Our battle has been with the state to provide us with court papers. The state has also been dragging its feet in committing to a court date. We had to go to court to compel them to commit to pre-trial conferences, which are to discuss matters leading up to the trial and set dates for the trial.

“Every time we have been to court we have had all our documents ready. We have furnished them with all our papers.” 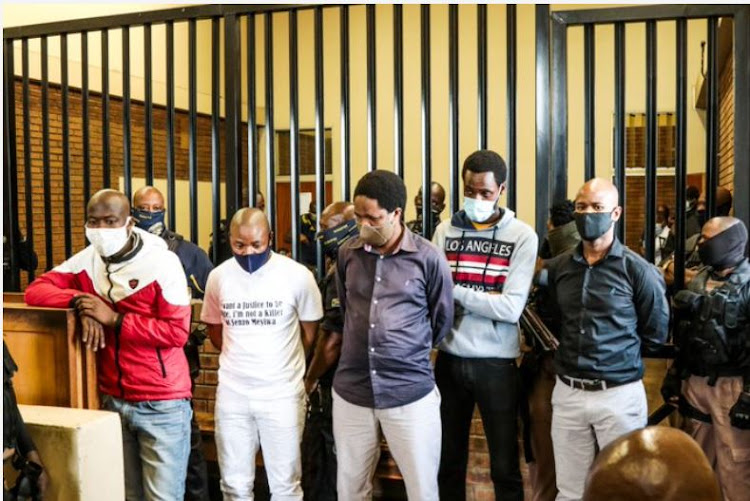 The five suspects implicated in Senzo Meyiwa's murder during a court appearance. Zamkhule Mbatha is suing the state for his wrongful arrest in connection with the murder seven years ago
Image:  AfriForum

He said their last court appearance was to force the state to commit to a pre-trial hearing, “which is when the trial date will be set”.

“We will be in the Johannesburg high court on November 22 for the hearing, which will be to set the trial date.”

Ndwandwe said the delay in getting to trial had compounded the difficulties of Mbatha’s life.

“His life has been totally destroyed by this.  He will never be OK again. People see him as Senzo’s killer even if he tells people he knows nothing about it.

“People look at him and think because he has a good attorney, his family have money and he is off the hook. It is not about him being innocent but rather about people thinking he has an attorney who has managed to fight for him. He is, however, innocent. This case is about making the state take responsibility for what they did.

“He and his family are poor and are struggling. He has come back to Johannesburg to try to find work. He is living between his family’s home in KwaZulu-Natal and Johannesburg.”

Monday’s hearing of the five men accused of the 2014 murder of Orlando Pirates and Bafana Bafana captain Senzo Meyiwa was likely to focus on setting ...
News
1 month ago

A notorious 32-year-old KwaZulu-Natal hitman, who has been implicated in the murder of former Bafana Bafana captain Senzo Meyiwa, has been convicted ...
News
1 month ago