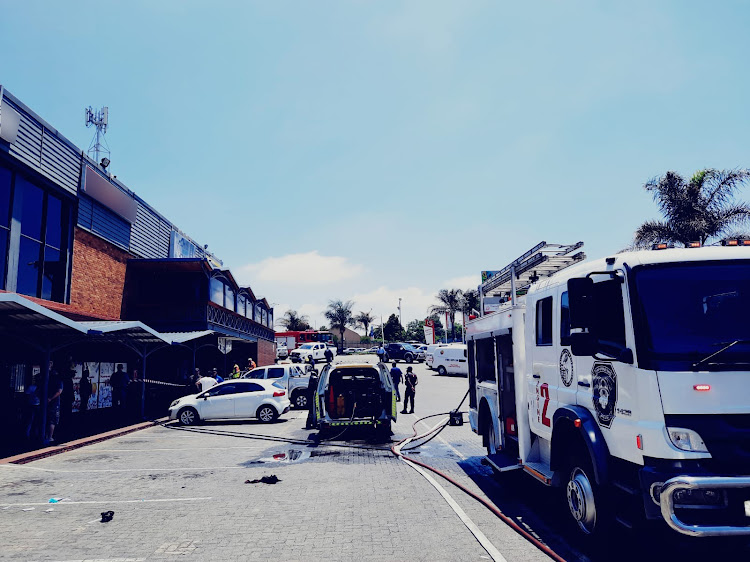 A fire at a gun store in south Johannesburg left four dead on Friday.
Image: ER24

Four people have been killed, including a 15-year-old boy, in a fire that broke out at a gun store in Glenanda, in the south of Johannesburg, on Friday.

Another person was left critically injured.

ER24 paramedics said teams arrived on the scene at 11.55am on Friday to find local security forces and fire services already in attendance battling a blaze.

“Explosions could be heard coming from the store. Three men, a woman and a 15-year-old boy that had apparently all been in the gun store had been rescued by bystanders and pulled to a safe distance.

“Medics assessed the patients and found that all five were critical, with their vital signs rapidly diminishing,” said Russel Meiring, ER24 spokesperson.

CPR and advanced life support interventions were immediately initiated in an effort to stabilise the patients.

“Unfortunately, after some time, the two men, a woman, and the young boy succumbed to their injuries and were declared dead.

“The fifth critically injured patient was transported to a nearby hospital for urgent care. The details surrounding this incident are unknown, but local authorities were on the scene for further investigations,” Meiring said.

Seven men between the ages of 25 and 35 were killed in a horror crash between a minibus taxi and a truck on the R545 between Bethal and Kriel in ...
News
7 months ago

A woman has been airlifted out of the Kruger National Park for cardiac care, a man is in critical condition after he was ejected from his car when it ...
News
7 months ago