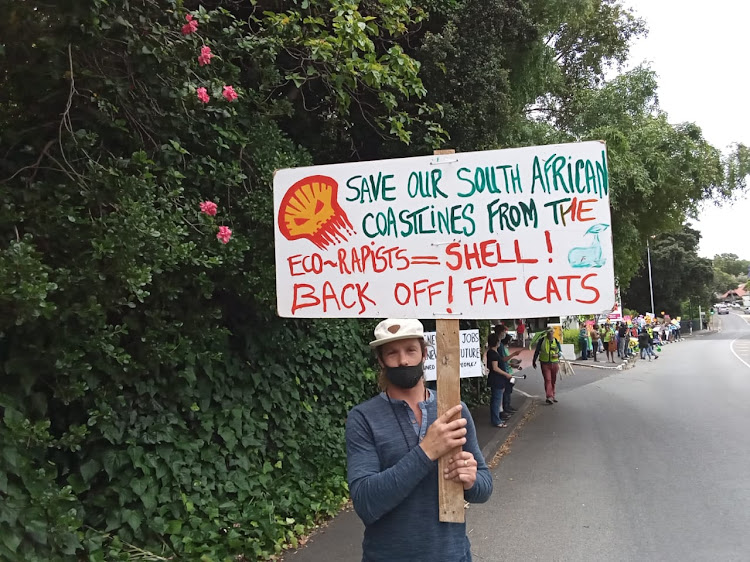 Aaron-Luke Rielly was among protesters who picketed Shell garage Paradise Motors, in Newlands, Cape Town earlier this month. A court has ordered the petrochemical company to temporarily halt plans for a seismic study
Image: Philani Nombembe

Shell has been ordered to immediately halt its seismic survey in the ocean off the Wild Coast.

On Tuesday, Makhanda high court judge Gerald Bloem granted an interdict sought by local communities and environmentalists, pending the outcome of a further application  still to be set down for hearing, as to whether Shell requires an environmental authorisation in terms of the National Environmental Management Act (Nema) to do the survey as part of its exploration project for gas and oil.

Shell claimed it had the necessary authorisation in terms of a licence granted under the Mineral and Petroleum Resources Development Act and a 2013 Environmental Management Programme, which detailed the seismic survey and proposed mitigating measures.

The survey, which covers almost the entire Eastern Cape coastline and will take four months, began earlier this month after a similar application for an interdict was dismissed.

In that matter, Makhanda high court acting judge Avinash Govindjee ruled submissions about the detrimental impact on the environment and marine life were “speculative at best” and the applicants had not proved a reasonable apprehension of irreparable harm.

The applicants in that matter have applied for leave to appeal.

The survey involves the discharge of pressured air from air guns which generates sound waves.

I wish Bazooka Radebe and Sbu Mqadi were here.

The full judgment in Zukulu and Others versus @GwedeMantashe1 and Others, together with the full court papers, can be accessed here: https://t.co/oSGiBgFlIK pic.twitter.com/8Mp0ZwGukH

Those opposed, namely Sustaining the Wild Coast NPC, local community representatives and All Rise Attorneys for Climate and the Environment NPC, claimed it will have a massive impact on all marine life.

They claimed they were not properly consulted about the survey which impacts on their customary rights — the relationship with their ancestors and the sea — and their livelihoods, particularly those of traditional fishers.

They also claimed Shell did not have proper authorisation under Nema.

In his ruling Bloem said Shell had not properly consulted with communities and had not respected local “practices and beliefs”, which in terms of the constitution had to be respected.

“It seems to me the exploration right, which was awarded on the basis of a substantially flawed consultation process, is thus unlawful and invalid,” he said.

On the issue of irreparable harm, a requirement that must be proved to obtain an interdict, Bloem said while Shell had pointed to the mitigation measures it was taking to minimise harm to marine life, “implicit in its contentions was an acknowledgment of harm”.

The applicants had relied on the evidence of 10 experts who provided a “massive body of expert evidence” on the threat to marine life.

“The opinions expressed are based on objective facts. There is no reason not to accept their evidence that establishes that without intervention by the court, there is a real threat to marine life.

“Shell did not adduce any expert evidence to neutralise this evidence. Shell’s denial that its activities will have an adverse impact on marine life cannot be sustained.”

Referring to the previous failed attempt at an interdict, Bloem said there had been no expert evidence before judge Govindjee, and “unsurprisingly” he had ruled the applicants in that matter had not established a reasonable apprehension of irreparable harm.

“That case is completely distinguishable from the present matter. In addition to the harm to marine life, the applicants have established  a negative impact on the livelihood of fishers and cultural and spiritual harm.”

On the issue of the balance of convenience, he said Shell had submitted that if the interdict was granted, it would result in an immediate cost of R350m, and an estimated total loss — as a result of having to terminate the survey and subsequent loss of the exploration right — exceeding R1bn.

The judge said the anticipated financial loss could not justify the infringement of the applicants’ constitutional rights and “the balance of convenience favours the protection of those rights”.

He said Shell had also pointed out the applicants could approach the mineral resources and energy affairs minister to cancel or suspend the exploration rights.

But this would be a time-consuming procedure and was not a satisfactory remedy. He doubted that this would be a fair process because it would mean approaching the same minister ( Gwede Mantashe), who is said to have tweeted that the government considers the objections to the seismic survey “as apartheid and colonialism of a special type, masquerading as a great interest for environmental protection”.

Bloem said: “Given the emotive language used by the minister, it is not unreasonable to believe he would not have suspended or cancelled any of Shell’s rights, especially since the minister delivered an answering affidavit wherein he nailed his colours to Shell’s mast, as it was submitted on behalf of the applicants.”

He said whether Shell requires environmental authorisation under Nema was a “difficult legal issue” to be determined by the court, “though I am of the view the applicants have prospects of success in that regard”.

He ordered Shell and the minister to pay the costs of the application for the interim interdict.

Wilmien Wicomb of the Legal Resources Centre, which together with attorney Richard Spoor represented the applicants, said the case had “huge significance”.

Sinegugu Zukulu, of Sustaining the Wild Coast, said: “The voices of the voiceless have been heard.”

Siyabonga Ndovela, of the Amadiba Crisis Committee, said it was a “big win” for all.

“Winning in this court case means we are not alone. The courts are with us in protecting our resources, which are the resources of the citizens, of all South Africans.”

Shell has not yet commented on the ruling.

Shell will have to call a halt to its seismic survey along the ecologically sensitive Wild Coast after the high court in Makhanda today interdicted ...
News
4 months ago

Mineral resources and energy minister Gwede Mantashe was ignorant and gravely insulting when he accused communities along the Wild Coast who are ...
News
4 months ago