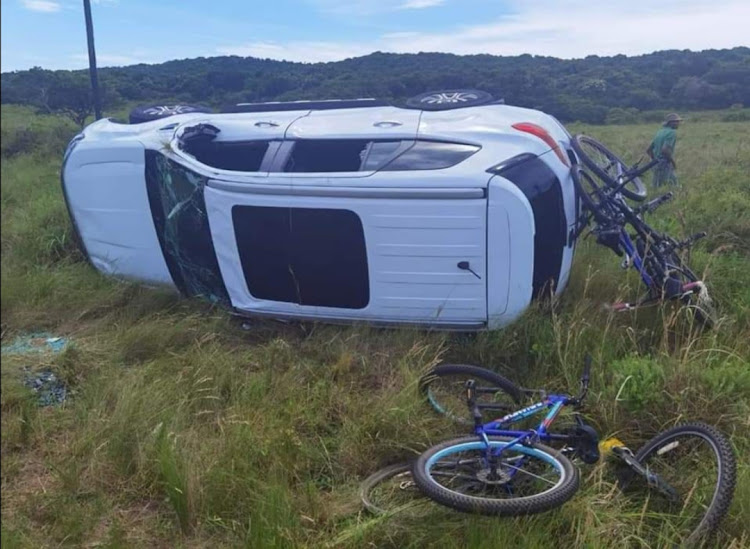 This SUV with a family of four inside was rolled over by an elephant at the iSimangaliso Wetland Park.
Image: Facebook/Crime Watch Daily

A KwaZulu-Natal family was traumatised after an elephant they encountered in the iSimangaliso Wetland Park, in the north of the province, flipped over their SUV.

Park spokesperson Bheki Manzini said the incident happened on Sunday at about midday on the road to Cape Vidal, near St Lucia.

“A vehicle travelling to Cape Vidal with two adults and two children aged about eight and 10 came into contact with an elephant.

“It was reported that the elephant pushed the vehicle with its tusks and the vehicle fell on its side with the passengers still inside.”

The incident was captured on video by another family travelling on the same road.

They appeared helpless and tried to ward off the elephant by hooting continuously.

“Park officials responded and rescued the family, taking them to safety. Luckily there were no severe injuries.

“The family is said to be from Mtunzini in KwaZulu-Natal,” said Manzini.

He said while “such incidents are not a common occurrence in iSimangaliso we caution our visitors to always remain vigilant and maintain a 50m distance from wildlife, particularly the big five, as human-wildlife conflicts do sometimes happen since animals are wild and roam freely in the park.

“We are grateful that no life was lost during this incident, and based on investigations there will be no further action taken against the elephant in question.”

Elephant tusks with an estimated street value of R400,000 have been seized from a residence at the upmarket Zimbali Eco Estate on the KwaZulu-Natal ...
News
6 months ago

A territorial elephant was not in the mood to share its chilling time in a river with more than 25 hippos and crocodiles in Shingwedzi in the Kruger ...
Lifestyle
1 year ago

I thought it was tickets: diver in terrifying seal attack