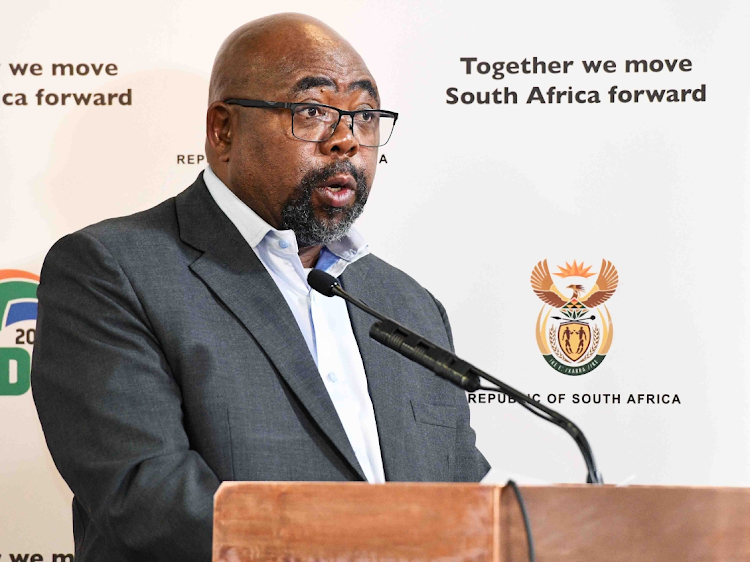 Employment and labour minister Thulas Nxesi has raised concerns around illegal recruitment practices, including the hiring of foreign workers who are in the country unlawfully.
Image: Jairus Mmutle

Amid the labour department’s “mega-blitz inspections” at hospitality venues in the Western Cape this week, minister Thulas Nxesi has announced new rules aimed at foreign workers in SA.

Nxesi, who joined a team of inspectors in Sea Point, Cape Town, on Tuesday, raised concerns about illegal recruitment practices, including the hiring of foreign workers who are in the country unlawfully.

He said some employers were subjecting undocumented foreign nationals to inferior labour standards and not covering them in terms of existing social protection measures such as the Unemployment Insurance Fund , Pension Fund and Compensation Fund.

“These practices are illegal. They are unacceptable and it is something that is preoccupying us daily in the department,” said Nxesi.

The labour department will conduct a series of hospitality inspections across the Western Cape this week to ensure businesses are following the ...
News
3 months ago

The department said the inspections led to extensive research on other aspects relating to migration management, and the department has since developed a new national labour migration policy and proposed amendments to the existing Employment Services Act.

The proposals will be released for a three-month public comment process before the end of February/March if cabinet approves the department’s submission.

Social partners at the national economic development and labour council (Nedlac) will also be afforded the opportunity to adjust the policy and bill during May/June before making a submission to parliament.

The proposals will focus on four major areas which will introduce significant changes to the country’s national labour migration policy (NLMP).

These four major areas are:

The department noted SA’s population expectations regarding access to work for South Africans, given worsening unemployment and perceptions that foreign nationals, especially those who are undocumented, are distorting labour market access.

This practice is promoted by some employers who do not comply with existing labour legislation and continue to undermine existing minimum standards.

“The employment and labour NLMP will introduce maximum quotas on the total number of documented foreign nationals with work visas that can be employed in major economic sectors such as agriculture, hospitality and tourism, construction, to name a few,” it said.

“The NLMP will be complemented by small business intervention and enforcement of a list of undesirable sectors where foreign nationals cannot be allocated business visas and amendments to the Small Business Act to limit foreign nationals establishing SMMEs and trading in some sectors of our economy.”

The department of home affairs is reviewing the Immigration Act, the Citizenship Act and the Refugees Act to ensure more alignment.

“The home affairs and border management authority are also getting into action to secure porous borders and allow for the orderly movement of people and other nationals across ports of entry only,” said the department.

Protection of migrant workers and their families

The department said it will ensure the protection of migrant workers and their families in accordance with international standards and guidelines.

“SA will also implement these initiatives within the context of its regional integration and co-operation imperatives that have already been agreed to at the Southern African Development Community and AU levels,” it said

“The list will be used as a last resort to allow foreign nationals in possession of the listed skills the economy requires, and where job offers have been made, to be allocated work visas.

“The government will also impose obligations on both the employer and the foreign national to transfer skills to locals and permits will be limited to specific durations,” said the department.

Who’s next? Security, hospitality sectors & farms could soon get a visit from Malema over not hiring locals

"This is not a one-off thing. We will also visit different institutions, especially where we get tip-offs," says EFF leader Julius Malema.
Politics
4 months ago

‘We want Zimbabweans to work in SA’: Julius Malema

EFF leader Julius Malema has appealed to employers to give South Africans preference as the country faces an all-time high youth unemployment rate of ...
Politics
4 months ago