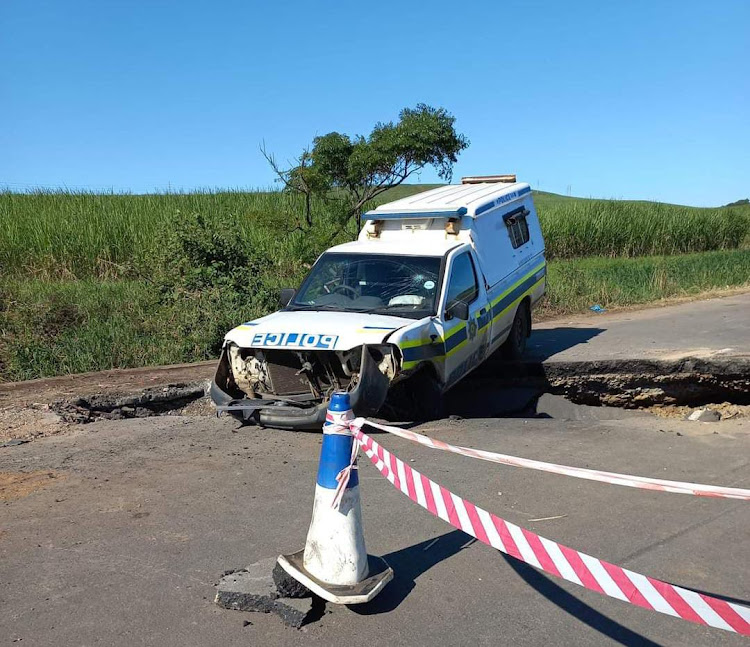 Two police officers were injured and have been hospitalised when their vehicle crashed on the unstable R102 in KwaDukuza, north of Durban.
Image: supplied

Concrete barricades placed on the unstable R102 in KwaDukuza, north of Durban, were allegedly “maliciously” removed before a police vehicle nosedived into the gap.

Ward councillor Jack Abrahams told TimesLIVE on Thursday the concrete barriers had been thrown into a stream.

The provincial transport department erected the barricades as the stretch of road was “dangerous” because it had been damaged by the floods.

“We heard that someone actually came in at night with a tractor and removed the barricades,” said Abrahams.

Dept of Transport have baricaded the road on both sides of the R102 in Compensation followingthe floods. As well as one...

KwaZulu-Natal police spokesperson Const Thenjiswa Ngcobo confirmed that a police van crashed on the road at 5am on Tuesday.

“Two police officers sustained injuries and were taken to hospital for medical attention. A case of reckless or negligent driving was opened at Tongaat police station for investigation.”

Technicians fixing a road that washed away during the recent floods were robbed of a provincial department of transport vehicle outside Umlazi on ...
News
3 weeks ago

Water vs asphalt: a battle with deadly consequences

Two enemies, asphalt and heavy rain, met last week and the result was catastrophic. Bridges crumbled and roads swallowed vehicles as they caved in ...
News
4 weeks ago