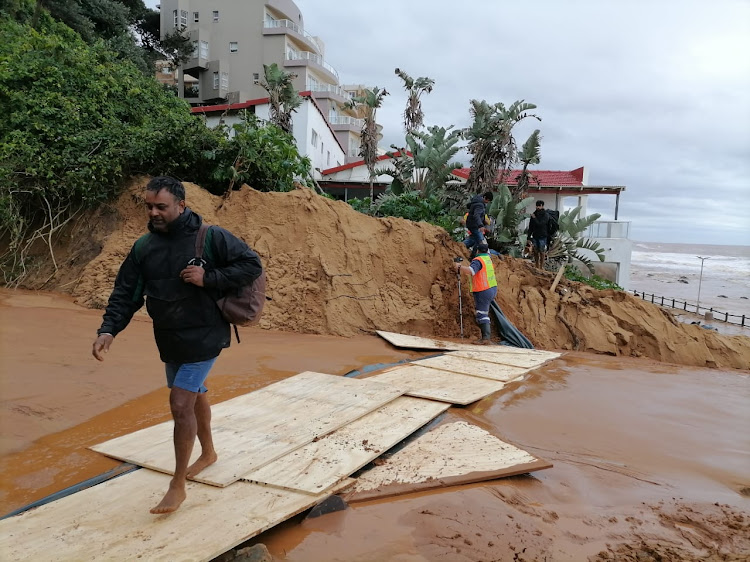 Steven Govender said he would leave uMdloti after falling victim to devastating floods for the second time in six weeks. He lost a car and a lot of belongings in the previous floods and the same happened this weekend.
Image: Lwazi Hlangu

A Durban family said they will have to start a new life somewhere else after being stuck in a flooded building for the second time in six weeks.

The Govender family are among 19 people rescued from two buildings in the uMdloti Beach area on Sunday following the torrential rain and flooding that engulfed the province over the weekend.

For the second time in just over a month, the small resort town north of Durban is one of the worse affected areas in the city.

Speaking to reporters after being rescued from the building, a visibly shaken but relieved Steven Govender said they had just moved back to the area after they were evacuated during the floods last month.

“We experienced it six weeks ago. We thought things are good and we moved back about a week ago,” he said.

He said they have lost so much in both floods that he will leave the area for good.

“We lost a vehicle and a lot of belongings in the previous floods. This time my vehicle is stuck again so I think it’s about starting a new life and looking for a new place and forget about uMdloti,” he said.

Govender was rescued with his wife, their two children and seven other residents in an apartment building called the Lazy Lizard.

The Lazy Lizard is one of several luxury apartments along South Beach Road on the uMdloti beachfront that suffered severe structural damage as a result of the floods. 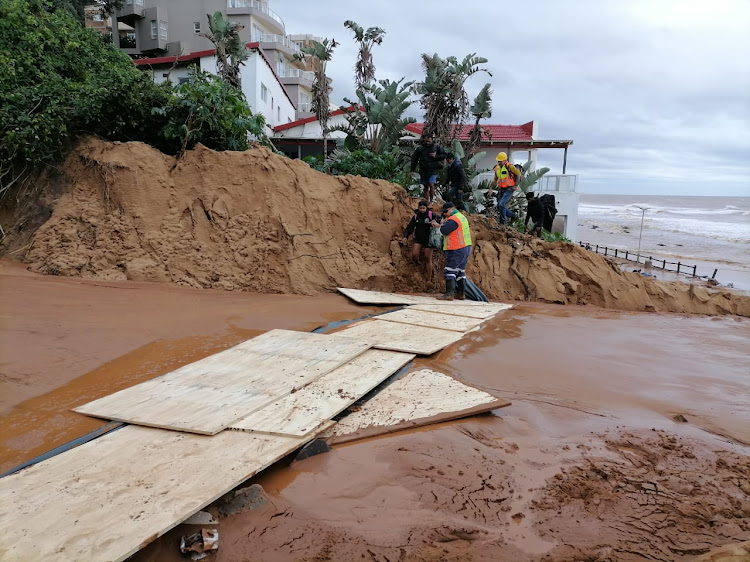 Robert Plattner, chair of the Lazy Lizard, said vehicles and other possessions stuck in the building are the least of his worries as he’s grateful there were no fatalities.

However, Plattner appears pessimistic about the chance of the building surviving the floods this time.

He said this weekend’s floods have hit them harder than the previous floods and it’s only a matter of time before the building collapses if the rain persists because there’s too much weight on the floors.

“The mud is up to the second floor and I’m not sure if we can save the building. It is already coming down from the back and there is no way to stop it because it is not designed to carry tons of extra weight. That’s the problem,” he said.

Describing the ordeal, Govender said flooding started late on Saturday afternoon and exacerbated through the night. He said water and mud started coming in from the basement and first and second floors.

“We needed to go to higher ground so we went to the third floor. We couldn’t get out as a result of the collapse of South Beach Road,” he said.

“We had no lights and water. We tried to communicate for people to come and assist but there was no coverage.

“This morning [Sunday] we saw the first signs of the rescue team. We are thankful, grateful and blessed that we’re out.”

Leon Fourie, Medi-response operations manager, told TimesLIVE they responded to the scene after receiving a call around 5am for 11 people stuck in the Lazy Lizard building.

“On arrival we found the first and second floor were completely covered in mud and washed away so we had to set up a high angle rope system to rescue 11 people from the building. They were taken to safety,” he said.

The rescue team went on to assist a further eight people from a building next door, the Show Break.

“I can’t comment on the structure but I don’t think it’s a dwelling fit for habitation. I don’t think people should stay in those buildings and that’s why we evacuated them.

“There is no report of missing people. There are no fatalities we’ve been made aware of."

The eThekwini municipality said the uMdloti waste water treatment plant was  damaged during the floods and could result in the area not having running water for a long time.

On Sunday night eThekwini mayor Mxolisi Kaunda visited the site to conduct inspections and assess damage to the plant.

As KwaZulu-Natal continues to experience heavy rains causing floods in the area, more than 200 people were evacuated from their homes on Saturday night, MEC for co-operative governance and traditional affairs Sipho Hlomuka said  on Sunday.

“Overnight, the province yet again underwent some of the worst storms accompanied by floods, resulting in the destruction that comes with such situations. We are yet to receive a comprehensive report on the impact of these latest heavy rains, but as reports come in a worrying picture is emerging,” Hlomuka said during a briefing to give an update on the situation in the province.

The MEC said the SA Weather Service predicted the storm would move up the coast, affecting the districts of King Cetshwayo and Mkhanyakude on Sunday.

As KwaZulu-Natal continues to experience heavy rains that are causing floods in the area, more than 200 people were evacuated from their homes on ...
News
1 month ago

KwaZulu-Natal Premier Sihle Zikalala on Thursday said although service providers had been appointed to build 1,810 temporary residential units to ...
News
1 month ago