Pietermaritzburg fatal shooting leads to pelting of shop and cars

Police and security guards responded quickly after a shooting incident at a supermarket that attracted would-be looters.
Image: PAUL FLEET/123RFthat

KwaZulu-Natal  police have confirmed that they are investigating an incident in which a man is alleged to have been killed by a security guard at Siyaya Cash and Carry — a large supermarket in the Pietermaritzburg central business district.

Provincial spokesperson Col Nqobile Gwala said: “It is alleged that today at 07:30am, a 30-year-old man was fatally shot by a security official while at a supermarket in Pietermaritz Street.”

She said a 51-year-old suspect was arrested at the scene while the firearm used was seized by the police. The suspect is expected to appear in court soon.

After the shooting,  pedestrians tried to loot the shop, while others started pelting motorists and the shop with stones.

The general manager of Pietermaritzburg’s crime-fighting initiative, Safe City, Lucas Holtzhausen, said while monitoring their surveillance cameras, the team spotted a large gathering outside the shop.

“This immediately drew suspicion. We alerted the police who descended speedily on the area,” said Holtzhausen.

He said he did not know the cause of the incident which was widely publicised on social media with videos and photographs. 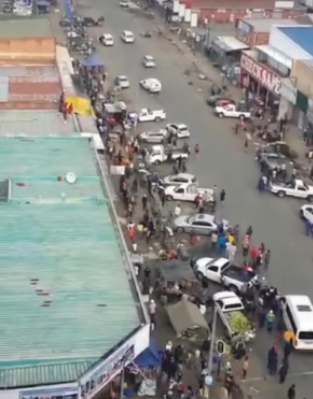 A large crowd of people gathered outside Siyaya Cash and Carry in burg Pietermaritz after a security guard allegedly shot dead a patron.
Image: Supplied

A source told TimesLIVE the fracas had been “caused by a till slip”. He said the situation got tense to the extent that police reinforcements were requested.

The deceased was identified as a vendor plying his trade at a local taxi rank.

As with many of the shops, Siyaya Cash and Carry attracts a sizeable number of spaza shop owners and vendors as customers. The densely populated stretch of the city is notorious for criminal activity.

“We often find that there are many vagrants who loiter on the lookout for opportunities to commit crimes,” said Holtzhausen.

The shop’s owners were not immediately available to comment.

Four people were killed and one was injured in a shootout with police shortly after they allegedly robbed a clothing store in the Greenstone Shopping ...
News
5 months ago

He went to visit his doctor. The next thing he was killed by crossfire

Two of the police officers charged with murdering Nathaniel Julies allegedly shot at people at a tuck shop on two separate occasions before the fatal ...
News
10 months ago