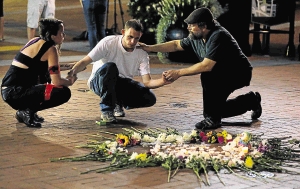 AFTERMATH: People stop at a late-night vigil in Charlottesville, Virginia, to pay respect for a friend injured in a car attack on a crowd during a Unite the Right rally that turned violent in the US university town at the weekend Picture: Jim Bourg/Reuters

At the scene where a suspected far-right extremist mowed down anti-fascist protesters in Charlottesville, Anna Quillom spent Sunday laying dozens of carnations along the street.

"I grew up here but this doesn't feel like my home any more. The lid's come off it," said Quillom, 36, who runs wine tours in the historic college town.

Welling up with tears, she added: "It was the best place in the world, inclusive, everyone cares about each other. Why are these Nazis able to come into our city?"

Nearby, at a makeshift memorial, a sign read: "No Place For Hate!" A red shoe, lost by one of the victims, had been stuffed with roses.

Charlottesville, a town of 47000 with a university at its heart, was shattered by Saturday's events, when hundreds of extremists descended and violence erupted.

US President Donald Trump denounced neo-Nazis and the Ku Klux Klan as criminals and thugs on Monday, bowing to mounting political pressure to condemn ...
News
4 years ago

In the high street, dotted with book and antique shops, people appeared stunned.

Why were groups that once operated in the shadows, now connected across America by social media, becoming increasingly emboldened to launch displays of hate?

In Charlottesville, where the council is seeking to remove a statue of Confederate General Robert E Lee, they have found a cause célèbre.

The massive statue stands in a small square opposite a red-brick church, with Lee seated atop his horse, Traveller. It has dominated the square since 1924.

The area used to be called Lee Park, named in his honour, but in June the city council voted to change that to Emancipation Park. On Saturday it was the scene of what is now known as the Battle of Charlottesville, as hundreds of far-right activists, some of them armed with assault rifles, gathered for a Unite the Right rally.

Appearing openly at the rally, flanked by a security team clad all in white, David Duke, the former Ku Klux Klan grand wizard, said: "We are going to fulfil the promises of Donald Trump. That's what we believed in, that's why we voted for Donald Trump. Because he said he's going to take our country back."

The rally was supposed to start at noon, but an hour before that it descended into chaos. Neo-Nazis and counter-protesters fought running battles as riot police tried to intervene. Bottles full of paint flew and pepper spray filled the air.

Organisers of the rally issued an order to evacuate and the extremists began leaving.

The day after the melee the steps leading into Emancipation Park were still covered in purple paint and General Lee was surrounded by crash barriers.

Nazi slogans scrawled in crayon on a pathway nearby were already fading, but the name "Robert E Lee" and the large numerals "1488" - a white power symbol - remained.

Residents steered clear of the park apart from one elderly woman who stood at the edge, her arms folded, staring at the statue.

Nearby, Merle Robertson, 88, was dressed in her Sunday best.

" I watched it on TV and I was mesmerised to think this was happening in our little town, " she said.