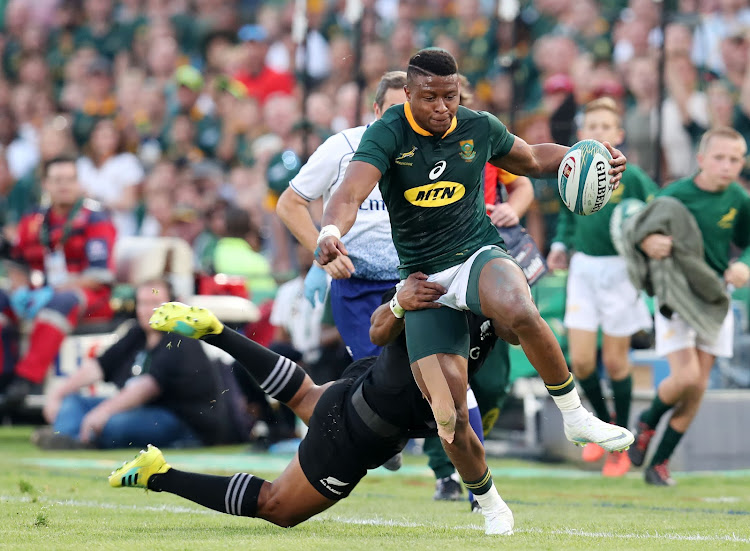 Aphiwe Dyantyi of South Africa powers through a tackle from Waisake Naholo of New Zealand during the Rugby Championship match between the Springboks and the All Blacks at Loftus Stadium in Pretoria on October 6, 2018.
Image: Muzi Ntombela/BackpagePix

The Springboks scored some memorable tries during the year and we have listed five of the best below.

On debut three kilometres down the road from his high school Jeppe Boys, Nkosi received a speculative pass from Damian de Allende 25 metres out.

Hard up against the touchline he grubbered ahead, and reacted quickest when a wicked bounce deceived the covering Elliot Daly.

This was a try made by skipper Siya Kolisi.

The Bok flank took the ball at pace just outside the All Black 22-metre area and drove hard into contact.

He smashed prop Tim Perry and hooker Nathan Harris over and offloaded deftly to De Allende, who was like a pilot fish at full pace on the skipper’s shoulder.

The big Bok No 8 started another sensational comeback with a storming run that left five would-be England tacklers in his wake after he picked up a loose pass on the 22-metre line.

It was the Boks’ fourth try in a remarkable first half comeback.

From a rolling maul down the left side of the field the ball was moved right.

Handré Pollard threw a lovely flat pass to a flying Le Roux, who hit the line at maximum pace and ghosted through the desperate England defence.

After an earlier try in the match Dyantyi scored the Boks’ fifth of the night and the one that gave them enough breathing room to win the match.

Elton Jantjies’ floated pass to Warren Whiteley on the left was quickly shovelled on to Dyantyi.

He appeared to be out of room along the touchline.

But his fast feet and even faster brain bamboozled the covering Beauden Barrett, TJ Perenara and Ben Smith, who were all left in a pile thanks to one brutal side-step and change of pace.