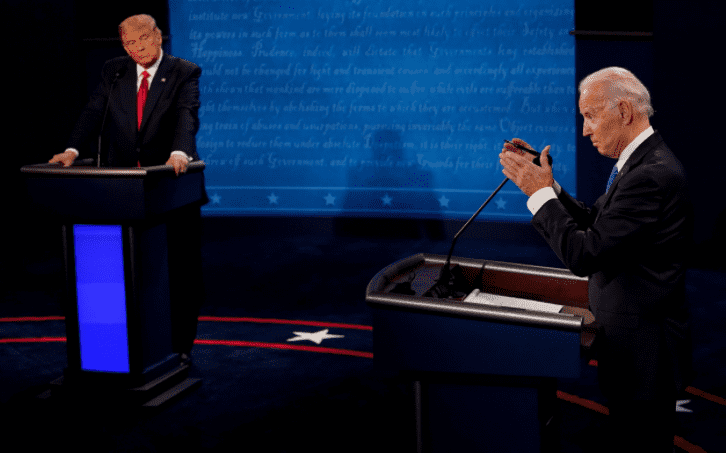 Donald Trump will square off with Joe Biden for the US presidency this week. File photo.
Image: Morry Gash/Pool via REUTERS/File Photo

As Donald Trump and Joe Biden face off in the US general elections this week, SA may not be high on the list of things they will be talking about, but our country has made the headlines in the past for comments both politicians have made about it.

According to a tally by the US Elections Project at the University of Florida, by Monday more than 95 million Americans had cast their votes in the election to choose their next president, with many more expected to head to polling stations on Tuesday.

And while most South Africans may just take a fleeting interest in the result, our country has been the topic of discussion by both Trump and Biden in recent months and years.

From weighing in on farm murders to claims of being “arrested” while trying to see Mandela, the pair have sparked controversy on both sides of the Atlantic with their comments.

TRUMP SAYS WE ARE A “CRIME-RIDDEN, DANGEROUS MESS”

SA has previously been the target of Trump's fiery Twitter fingers, with the incumbent US president once tweeting: “I really like Nelson Mandela but SA is a crime-ridden mess that is just waiting to explode — not a good situation for the people!”

Two years later he tweeted that we are a “total and dangerous mess”.

As I have long been saying, South Africa is a total - and very dangerous - mess. Just watch the evening news (when not talking weather).

HE ALSO ALLEGEDLY THOUGHT MANDELA WAS NOT A REAL LEADER

According to a Washington Post report in September this year, Trump's former lawyer Michael Cohen, alleged that Trump did not think that Mandela was a real leader or “the kind he respected”.

In his tell-all book, Cohen claimed that Trump also believed that “Mandela f**ked the whole country up.”

The White House slammed the book and said that it was an “attempt to profit off of lies”.

BUT WAS BIDEN REALLY ARRESTED IN SA TRYING TO VISIT MADIBA?

Mandela also dominated the discussion earlier this year when Biden repeated the claim that he was arrested during a trip to SA in the 1970s.

Biden said he had “the great honour of being arrested with our UN ambassador on the streets of Soweto” while trying to reach Mandela.

“He threw his arms around me and said, 'I want to say thank you.' I said, 'What are you thanking me for, Mr President?' He said: 'You tried to see me. You got arrested trying to see me,'" Biden later added, reports the BBC.

The broadcaster said that a deputy campaign manager later clarified that Biden was referring to an episode where he was “separated” from black colleagues at an airport during the trip.

TRUMP WEIGHS IN ON FARM MURDERS IN SA

Trump's Twitter fingers also sparked outrage in 2018 when he tweeted that he had asked his secretary of state to “closely study the SA land and farm seizures and expropriations and the large-scale killing of farmers”.

The SA government rubbished the claims.

“We totally reject this narrow perception which only seeks to divide our nation and remind us of our colonial past,” it said in a statement on social media.

Gun sales have skyrocketed ahead of the US presidential election as fears of unrest grow with many worried the result could be contested, spark violence or see gun laws changed.

A record 90 million Americans have voted early in the US presidential election, data on Saturday showed, as President Donald Trump and his Democratic ...
News
1 year ago

On the morning of April 11 1992 the British public woke up to a headline on the front page of the British tabloid, The Sun, declaiming: "It's The Sun ...
Opinion & Analysis
1 year ago

US surpasses 95 million early ballots on eve of Election Day

More than 95 million Americans had cast their votes in the 2020 presidential election by Monday, according to a tally by the US Elections Project at ...
News
1 year ago