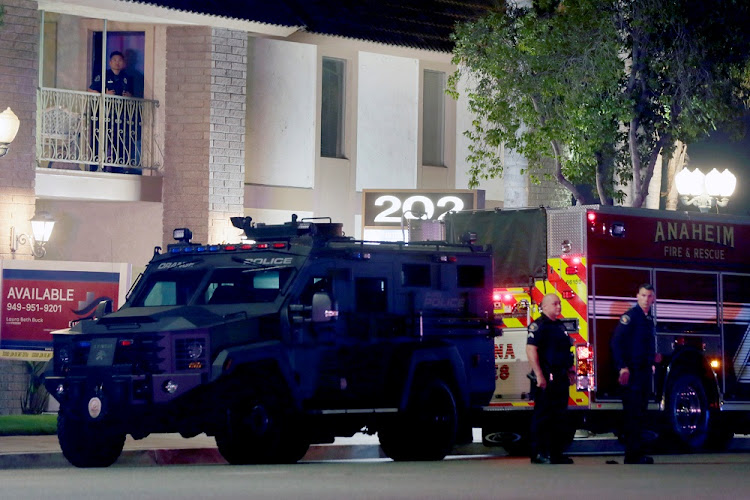 City of Orange police officers stand in front of a building after a shooting in Orange, California, US, on March 31 2021.
Image: REUTERS/Alex Gallardo

Police in the Californian city of Orange reported a shooting on Wednesday with “multiple victims at the scene including fatalities”, and local news media outlets said four people were killed before a suspect was arrested.

Few official details of the violence in the city south of Los Angeles were immediately available, but the Los Angeles City News Service (CNS) and television station KNBC-TV reported that in addition to the four dead, two people were wounded by gunfire.

Reporting the incident on its official Facebook page, the Orange Police Department said its officers arrived at about 5:30pm local time “as shots were being fired and located multiple victims at the scene including fatalities”.

The police statement said an “officer-involved shooting” had occurred and that the situation had since been “stabilised” with no further threat to the public.

KNBC-TV reported the shooting erupted at a business complex in Orange, a city about 30 miles southeast of downtown Los Angeles. The television station and CNS reported that the dead included a child. Various news outlets also reported that the shooter was among those injured.

The violence marked the third deadly mass shooting in the US over the past two weeks.

Eight people were shot to death by a gunman who went on a rampage at three day spas in the Atlanta area on March 16. And 10 people were killed on March 22 when a man opened fire at a supermarket in Boulder, Colorado. The lone suspects in both those shootings were arrested.

The Biden administration on Tuesday announced a set of measures responding to rising anti-Asian violence, including deploying $49.5 million from ...
News
1 month ago

The second deadly US mass shooting in a week is putting new pressure on President Joe Biden to deliver on the gun control promises he made as a ...
News
1 month ago
Next Article