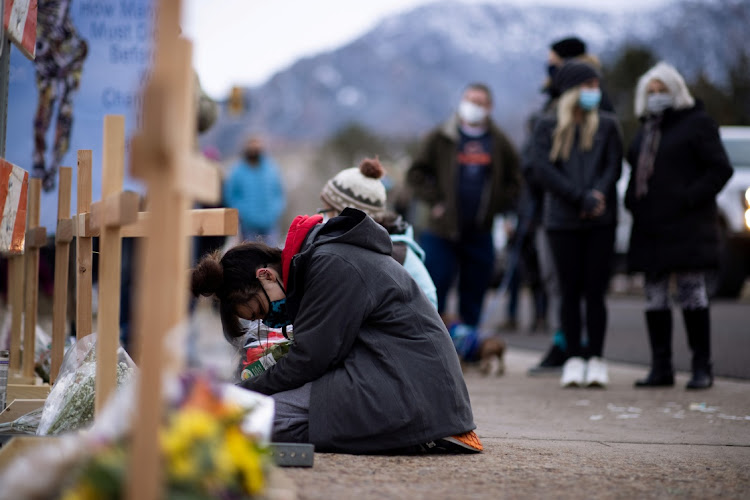 King Soopers employee Starr Samkus, 20, cries at the site of a mass shooting at King Soopers grocery store in Boulder, Colorado, US March 23, 2021. Samkus was not working when the shooting occurred.
Image: REUTERS/Alyson McClaran

The second deadly US mass shooting in a week is putting new pressure on President Joe Biden to deliver on the gun control promises he made as a candidate.

A gunman on Monday killed 10 people, including a police officer, at a grocery store in Boulder, Colorado, just six days after another gunman fatally shot eight people at Atlanta-area day spas.

“I don't need to wait another minute — let alone an hour — to take common sense steps that will save the lives in the future, and I urge my colleagues in the House and Senate to act,” Biden said at the White House on Tuesday.

Yet Biden, who took office in January, faces an uphill battle in winning congressional passage of gun-related measures he pledged during his presidential campaign.

The US has the world's highest rate of civilian gun ownership, RAND Corp research shows. There were more than 43,000 US gun deaths last year, according to the Gun Violence Archive.

“I've beaten the National Rifle Association nationally twice, passed meaningful gun legislation at the federal level, and I'll do it again,” Biden said last year at one of several campaign events focused on the issue, referring to the influential gun rights group closely aligned with Republicans.

“As president, I promise you I will get these weapons of war off the street again,” Biden added, referring to a national ban on assault-style weapons that lapsed in 2004.

The numerous US mass shootings have failed to prompt lawmakers to pass gun control legislation, thanks in large part to opposition from congressional Republicans and the NRA. The right to bear arms is enshrined in the US Constitution's Second Amendment and many Americans cherish gun rights.

Nearly 70% of Americans support adding “strong or moderate” federal gun restrictions, and ideas such as background cheques and databases to track ownership have even greater public support, a 2019 Reuters poll found.

Biden's fellow Democrats hold only slim majorities in both the House of Representatives and the Senate.

The House on March 11 passed two bills that would broaden background cheques for gun buyers, but the legislation faces an uncertain future in the Senate. Most legislation requires 60 votes in the 100-seat chamber to move forward. With Republicans holding 50 seats, reaching that threshold appears difficult.

Biden has not put forth his own legislation but on Tuesday reiterated his call for the Senate to approve the House-passed bills and also advocated a ban on assault-style weapons. A Senate panel held a hearing on gun issues on Tuesday.

“This is not and should not be a partisan issue. This is an American issue. It will save lives — American lives — and we have to act,” Biden said.

Asked by a reporter if he would propose his own bill, Biden said he would talk about that later.

Any potential gun control measures passed by Congress would almost certainly face a legal challenge that could reach the Supreme Court, whose 6-3 conservative majority is seen as sympathetic to an expansive view of gun rights.

A gunman opened fire at a supermarket in Boulder, Colorado, on Monday, killing 10 people, including a police officer, before being arrested, marking ...
News
1 month ago

A US police officer killed in a mass shooting at a Colorado supermarket on Monday had seven children and had been looking for a new job to protect ...
News
1 month ago

Biden has long embraced gun control. As vice-president under President Barack Obama, Biden was instrumental is seeking congressional approval of legislation after a 2012 mass shooting at a Connecticut elementary school.

After a fierce NRA lobbying campaign, Senate Republicans in 2013 thwarted legislation that would expand background cheques for gun buyers, ban assault-style weapons and bar high-capacity gun magazines. The NRA since then has encountered internal upheaval and legal challenges.

As a candidate, Biden pledged to hold gun makers accountable in the courts for firearms violence, to sign new laws restricting assault weapons and to expand background cheques for gun sales. Many of his promises would require congressional passage but gun control activists have urged Biden to take executive action on matters he has the power to address by himself.

These activists proposed even before the recent shootings that Biden direct the Justice Department's Bureau of Alcohol, Tobacco, Firearms and Explosives to block the sale of self-assembled “ghost guns” without background cheques or serial numbers to identify the finished product.

They also urged Biden to name a permanent director of that agency, which is headed by an interim chief installed under Republican former President Donald Trump, a close NRA ally.

Gun control activists have been holding regular virtual meetings with senior White House aides Susan Rice and Cedric Richmond. These sessions have been focused on soliciting views rather than outlining policy action, according to people who attended, speaking on condition of anonymity.

Ryan Borowski, a 37-year-old massage therapist who was in the Colorado grocery store during Monday's shootings, said that he would like to see lawmakers pursue practical gun regulations to take weapons out of the hands of mentally unstable people.

“I've listened to gun advocates and I've listened to the other side, and I have to agree with both sides there is a lot of common sense laws that can be passed,” Borowski said. “There are a lot of stupid loopholes.”