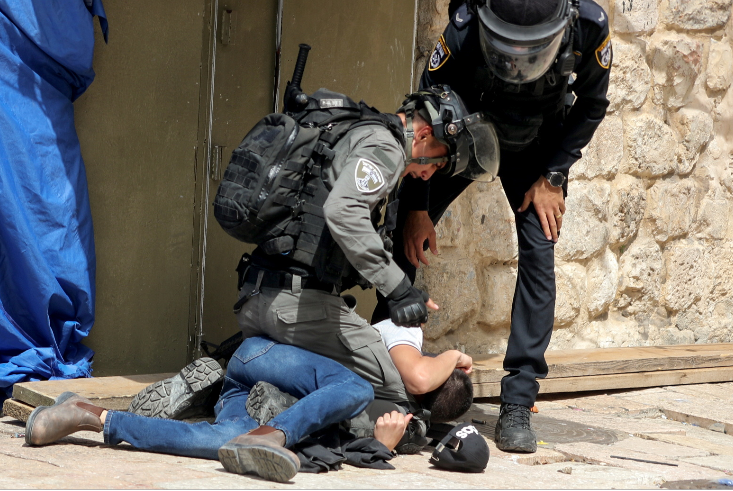 Israeli police detain a Palestinian during clashes at the compound that houses Al-Aqsa Mosque, known to Muslims as Noble Sanctuary and to Jews as Temple Mount, in Jerusalem's Old City, on May 10 2021.
Image: REUTERS/Ammar Awad

Palestinian protesters threw rocks and Israeli police fired stun grenades and rubber bullets in clashes outside al-Aqsa mosque in Jerusalem on Monday, as Israel marked the anniversary of its capture of parts of the city in the 1967 Arab-Israeli war.

Al-Aqsa, Islam's third-holiest site, has been a focal point of violence in Jerusalem throughout the Muslim holy month of Ramadan. The clashes have raised international concern.

Tensions were particularly high as Israel marked "Jerusalem Day", its annual celebration of the capture of East Jerusalem and the walled Old City that is home to Muslim, Jewish and Christian holy places.

In an effort to ease the situation, Israeli police said they had banned Jewish groups from paying Jerusalem Day visits to the holy plaza that houses al-Aqsa, and which Jews revere as the site of biblical Jewish temples.

Police were also considering whether to reroute a traditional Jerusalem Day march in which thousands of Israeli flag-waving Jewish youth walk through the Old City's Damascus Gate and the Muslim Quarter.

The violence at the holy compound abated several hours after it began and witnesses said Israeli police had begun allowing Palestinians over the age of 40 to enter.

In public remarks, Prime Minister Benjamin Netanyahu said Israel was determined to uphold law and order in Jerusalem while preserving "freedom of worship and tolerance for all".

Israel views all of Jerusalem as its capital, including the eastern part that it annexed in a move that has not won international recognition. Palestinians want East Jerusalem to be the capital of a state they seek in the occupied West Bank and Gaza.

Tensions have also been fuelled by the planned evictions of several Palestinian families from the Sheikh Jarrah neighbourhood in East Jerusalem.

Israel's attorney-general secured a deferment on Sunday of a Supreme Court hearing on Monday in the long-running evictions case that had threatened to stoke more violence.

A lower court had found in favour of Jewish settlers' claim to the land on which the Palestinians' homes are located, a decision seen by Palestinians as an attempt by Israel to drive them out of contested Jerusalem.

US National Security Adviser Jake Sullivan expressed "serious concerns" about the situation in Jerusalem, including the potential evictions, in a call with his Israeli counterpart on Sunday.

UN Secretary-General Antonio Guterres also expressed on Sunday his concern over the situation.

Israel's attorney-general secured a deferment on Sunday of a court hearing on planned evictions of Palestinians in Jerusalem, a session that had ...
News
4 months ago