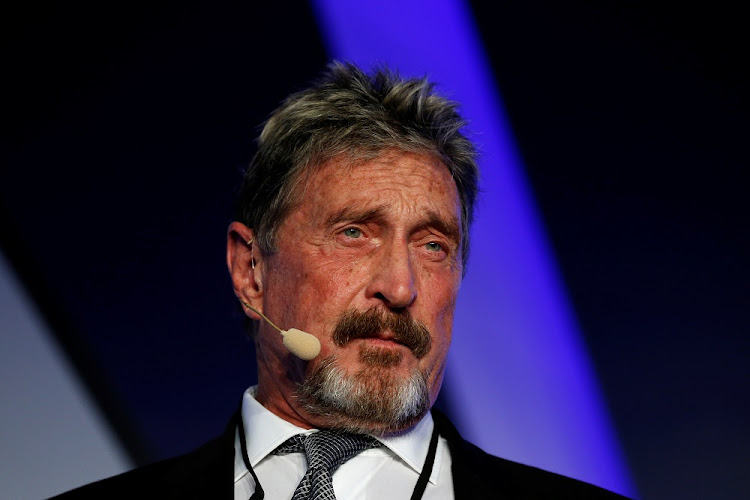 John McAfee, the creator of the eponymous antivirus software, was found dead on Wednesday in prison outside Barcelona. He was 75.

In recent years, McAfee became a prominent booster of cryptocurrencies, ran unsuccessfully for US president, had numerous run-ins with the law and traded in extreme conspiracy theories.

McAfee was discovered dead in his prison cell hours after Spain’s national court approved his extradition to the US over multiple tax fraud charges. Security personnel at the Brians 2 prison in northeast Spain tried but failed to revive him, the Associated Press reported, citing a statement from the region’s government.

McAfee had been in Spanish custody since October on a June 2020 US indictment in which he was charged with failing to file four years of tax returns while concealing assets. Then in March, he was indicted and accused of fraud and money laundering over his use of social media to promote cryptocurrencies, which prosecutors said generated $13m in illicit gains for McAfee and a co-conspirator.

Nishay Sanan, McAfee’s attorney, said his colleagues in Spain confirmed that McAfee had been found dead in his jail cell. Sanan claimed the US government had identified McAfee as a target and “tried to erase him, but failed.”

“John lived his life the way he saw fit,” Sanan said. “In the end that is all that matters. You don’t have to agree with his way  — he did not care.”

The Justice Department declined to comment and a spokesperson referred questions to Spanish authorities.

Before his legal turmoil, McAfee was a pioneer of the cybersecurity industry. He founded McAfee Corp in 1987 in Santa Clara, California, and led the company as it dominated the market for antivirus protection of personal computers. Half of all Fortune 100 companies were using his software during that time. McAfee resigned in 1994. Decades later he told the South China Morning Post that running the company no longer was fun as it grew to a huge corporation with thousands of employees.

Intel Corp bought the company in 2010 and later rebranded all McAfee products as Intel Security. After his name was removed, McAfee told the BBC, “I am now everlastingly grateful to Intel for freeing me from this terrible association with the worst software on the planet.”

You know him for McAfee antivirus, or from fleeing murder and drug 'questions' in Belize - now John McAfee has set his sights on the oval office. ...
News
6 years ago

McAfee relocated to Belize in 2008 after his $100m fortune was reduced to $4m after a series of failed investments in property, real estate and bonds. There he had one of his biggest conflicts with authorities in 2012 after the killing of a neighbour, Gregory Faull, a 52-year-old contractor and Florida native. McAfee’s home on the island of Ambergris Caye was searched after Faull was shot dead and police said they wanted to question him as part of a murder investigation.

He then sought asylum in Guatemala in 2012, claiming he wasn’t on the run from authorities in Belize. He turned to social media and public interviews to salvage his reputation, sending updates to Wired magazine, allowing two reporters from Vice magazine to accompany him and posting missives to his own website. He discussed eluding police by burying himself in sand with a cardboard box and changing his appearance.

McAfee was expelled from Guatemala and arrived in Miami in December 2012. In an interview with Bloomberg News the day of his departure, McAfee, then 67, said he was being forced out of Belize, but was “perfectly happy with the decision.” He apologised to Guatemala’s then-president for putting him in “a slippery position.” He was later ordered by a Florida judge to pay more than $25m to Faull’s estate.

In 2016, McAfee announced a run as a presidential candidate for the Libertarian Party, campaigning on a privacy-focused platform that included pushing for the government to create a cybersecurity defence strategy. The party’s nomination was won by former New Mexico governor Gary Johnson.

By 2017, McAfee jumped on the bitcoin bandwagon as CEO of MGT Capital Investments Inc. He’d promised to turn the former video game operation into a profitable cybersecurity firm by ramping up its bitcoin mining business. He stepped down later that year to become the CEO of a cryptocurrency company, Luxcore.

Part of his cryptocurrency venture included charging more than $105,000 per tweet to promote initial coin offerings. McAfee later told his Twitter followers he’d been forced to “go dark” on social media after receiving unspecified “threats” from the US Securities and Exchange Commission.

During the period from 2014 to 2018 McAfee failed to file US tax returns, according to a federal indictment. After eluding law enforcement, he was arrested and detained last October in Spain. From prison, McAfee was able to use Twitter to continue promoting cryptocurrencies, but also to share his experience. In April, he tweeted: “This has been the most trying period in my life.” At that point, he had been in the Catalonian prison for six months.

In November 2019, McAfee took to Twitter to show off his latest tattoo on his right bicep. It read, ‘$WHACKD.’ In a related tweet, he wrote: “Getting subtle messages from US officials saying, in effect: 'We’re coming for you McAfee! We’re going to kill yourself.' I got a tattoo today just in case. If I suicide myself, I didn’t. I was whackd. Check my right arm.”

Spanish newspaper La Vanguardia reported that McAfee appeared to have died by suicide, citing a statement from the regional department of justice of Catalonia, where he was being held.

Ocean of possibilities: SA shark study is first to have all-crypto funding

Police in China arrested more than 1,100 people suspected of using cryptocurrencies to launder illegal proceeds from telephone and internet scams in ...
News
11 months ago

Investigators seized 63.7 bitcoins, now valued at about $2.3m, paid by Colonial after last month's hack of its systems that led to massive shortages ...
News
11 months ago