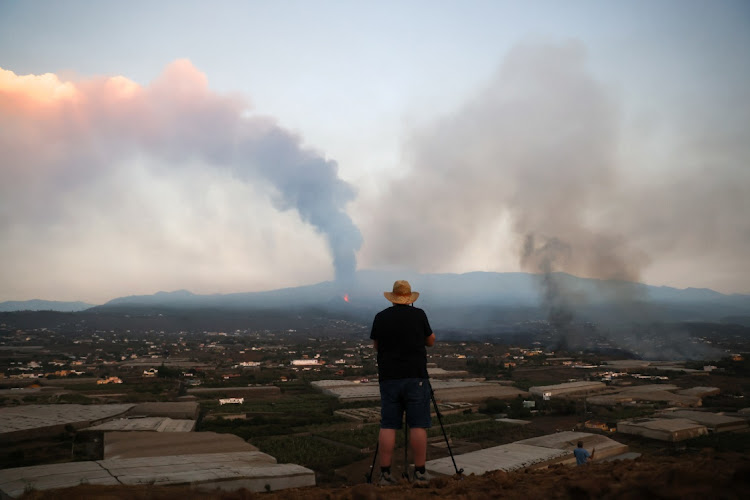 Those affected have been told to keep their doors and windows closed and to disconnect heating and air conditioning to prevent outside air from entering.
Image: REUTERS/Nacho Doce

Authorities told several thousand residents of La Palma to stay home because of worsening air quality as the erupting volcano on the Spanish island spewed red-hot lava and thick clouds of black smoke.

"The new lockdown is as a consequence of the meteorological conditions... that prevent the dispersion of gases and keep them at low levels of the atmosphere," emergency services said in a statement. They said the lockdown would affect around 3,500 people.

Those affected have been told to keep their doors and windows closed and to disconnect heating and air conditioning to prevent outside air from entering.

Lockdowns had already been ordered in the areas of San Borondon, Marina Alta, Marina Baja and La Condesa.

About 6,000 people have been evacuated from their homes since the Cumbre Vieja volcano began erupting on Sept. 19.

More than 800 buildings have been destroyed on the island, which has a population of about 83,000 and is one of an archipelago making up the Canary Islands in the Atlantic.

On Friday, lava flowed from a new vent in the volcano, which the Canaries Volcanology Institute described as a new "focus of eruption".

The volcano was experiencing "intense activity", Miguel Angel Morcuende, director of the Pevolca response committee, told a news conference on Friday. But he also put the eruption into the context of the wider island.

"Less than 8% of the island is affected by the volcano. The rest is leading a normal life," he said.

Lava flowed from a newly opened crack in the Cumbre Vieja volcano on Spain's La Palma on Friday, carving a different path from previous flows and ...
News
1 month ago

Volcanic explosions spewed red hot lava high into the air on La Palma on Saturday as a new emission vent opened, forcing the small Spanish island to ...
News
2 months ago

Lava from La Palma volcano slows down, will not reach ocean tonight - officials

Lava from a volcano that erupted on the Spanish island of La Palma was advancing slower than originally anticipated and will not reach the Atlantic ...
News
2 months ago