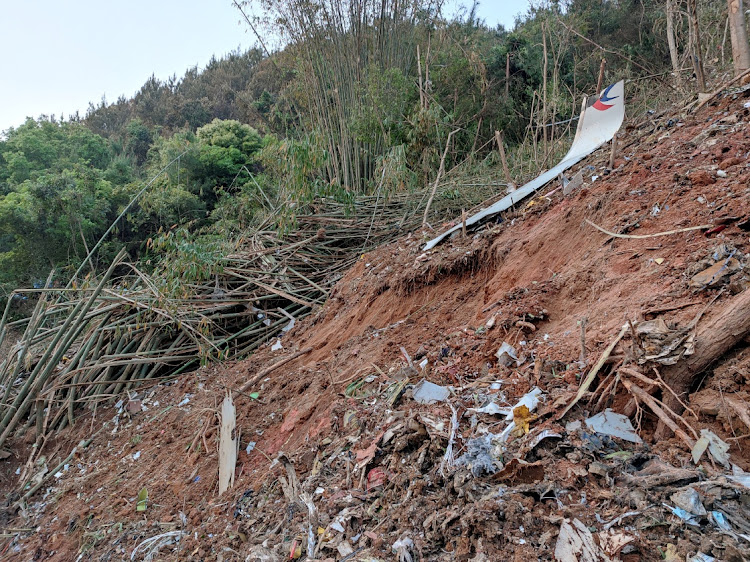 Rescuers in China scoured heavily forested slopes on Tuesday with hopes fading of finding any survivors from the 132 people aboard a China Eastern Airlines passenger jet that crashed a day earlier in the mountains of southern Guangxi.

Parts of the Boeing 737-800 jet were strewn across mountain slopes charred by fire after China's first crash involving a commercial jetliner since 2010. Burnt remains of identity cards, purses and wallets were also seen, state media reported.

Flight MU5735 was en route from the southwestern city of Kunming, capital of Yunnan province, to Guangzhou in Guangdong province bordering Hong Kong, when it suddenly plunged from cruising altitude and crashed.

Chinese media carried brief highway video footage from a vehicle's dashcam apparently showing a jet diving to the ground behind trees at an angle of about 35 degrees off vertical. Reuters could not immediately verify the footage.

"Although I was far away, I could still see that it was a plane. The plane did not emit smoke during the fall. It fell into the mountains and started a fire."

State media have described the situation as "grim", and that the possibility of all onboard perishing could not be ruled out.

A working group from the Chinese aviation regulator was deployed to the crash site, alongside fire rescue and paramilitary forces.

Vice Premier Liu He left for Wuzhou city in Guangxi on Monday night to oversee the rescue efforts and crash investigation after an emergency government meeting.

The State Council, or the cabinet, said it would identify the cause as soon as possible, and strengthen checks into potential safety hazards in the civil aviation sector.

Describing the difficult terrain, state media said the crash site is hemmed in by mountains on three sides, with access provided by just one tiny path. Rain was forecast for the area this week.

Authorities barred journalists and onlookers from approaching the site. An official at a checkpoint at Lu village in Teng county told Reuters that they were keeping the road clear for emergency service vehicles.

US-based aviation analyst Robert Mann of R.W. Mann & Company said investigators will need the flight data recorders to understand what might have caused the abrupt descent suggested by Automatic Dependent Surveillance-Broadcast (ADS-B) data. ADS-B is a technology that allows aircraft to be tracked.

The crash comes as Boeing seeks to rebound from several overlapping crises, including the coronavirus pandemic and crashes involving its 737 MAX model. The voice cockpit recorder could also yield clues to what went wrong once it is found.

Elwell, who led the FAA during the 737-MAX crisis, said mechanical failures in modern commercial jets were rare at cruise altitude.

China Eastern and two of its subsidiaries on Monday grounded its fleet of 737-800 planes, state media reported. The group has 225 of the aircraft, data from British aviation consultancy IBA shows.

Other Chinese airlines have yet to cancel any of their flights that use 737-800 aircraft as of Tuesday, according to data from Chinese aviation data provider Flight Master.

"Given Boeing's problems with the 737 MAX, there is some chance that consumers may not want to fly on a 737 until the cause of the China Eastern crash is determined not to be a design or manufacturing issue," Cai von Rumohr, an analyst at investment bank Cowen Inc, said in a note.

Onshore-listed shares of China Eastern slumped more than 5% on Tuesday, while those trading in Hong Kong fell 4% in early morning trade.

The last crash of a commercial jetliner in China was in 2010, when an Embraer E-190 regional jet flown by Henan Airlines crashed, killing 44 of 96 people on board.

China Eastern Airlines passenger jet has 'accident', 133 passengers on board

The jet involved in the accident was a Boeing 737 aircraft.
News
2 months ago

China reported its first Covid-19 deaths since January 2021 as the omicron variant continued to spread across the world’s most-populous nation.
News
2 months ago