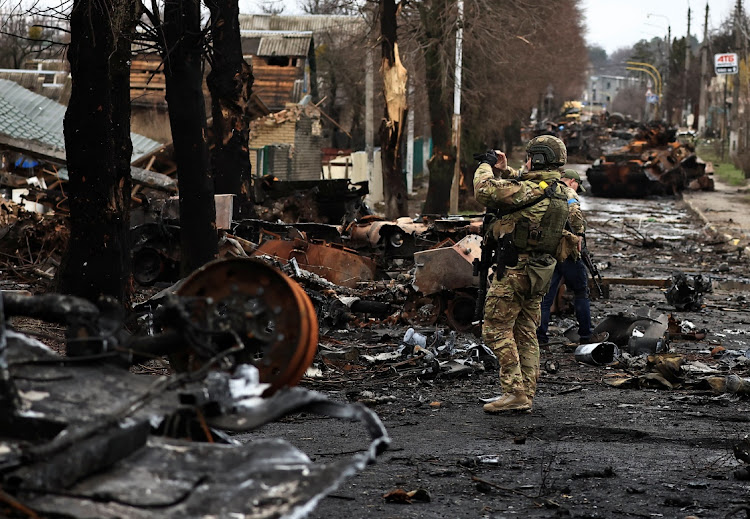 A serviceman uses his mobile phone to film a destroyed Russian tank and armoured vehicles in Bucha, in Kyiv region,
Image: REUTERS/Zohra Bensemra

As Ukraine claimed its forces had retaken all areas around Kyiv, the mayor of a liberated town said 300 residents had been killed during a month-long occupation by the Russian army, and victims were seen in a mass grave and still lying on the streets.

Ukraine's troops have retaken more than 30 towns and villages around Kyiv, Ukrainian officials said on Saturday, claiming complete control of the capital region for the first time since Russia launched its invasion.

At Bucha, a town neighbouring Irpen, just 37km (23 miles) northwest of the capital, Reuters journalists saw bodies lying in the streets, and the hands and feet of multiple corpses poking out of a still open grave at a church ground.

After five weeks of fighting, Russia has pulled back forces that had threatened Kyiv from the north to regroup for battles in eastern Ukraine.

“The whole Kyiv region is liberated from the invader,” Ukrainian Deputy Defence Minister Hanna Malyar wrote on Facebook. There was no Russian comment on the claim, which Reuters could not immediately verify.

President Volodymyr Zelenskyy warned in a video address: “They are mining all this territory. Houses are mined, equipment is mined, even the bodies of dead people.” He did not cite evidence.

Ukraine's emergencies service said over 1,500 explosives had been found in one day during a search of the village of Dmytrivka, west of the capital.

Russia's defence ministry did not reply to a request for comment on the mining allegations. Reuters could not independently verify them.

But in Bucha, Mayor Anatoliy Fedoruk said more than 300 residents had been killed. Many residents tearfully recalled brushes with death and cursed the departed Russians.

“The bastards!” Vasily, a grizzled 66-year-old man said, weeping with rage as he looked at more than a dozen bodies lying in the road outside his house. “I’m sorry. The tank behind me was shooting. Dogs!”

British Foreign Secretary Liz Truss said she was appalled by atrocities in Bucha and voiced support for the International Criminal Court's inquiry into potential war crimes.

Since the launch on Feb. 24 of what President Vladimir Putin called a “special military operation” to demilitarise Ukraine, Russia has failed to capture a single major city and has instead laid siege to urban areas, uprooting a quarter of the country's population.

Russia has depicted its drawdown of forces near Kyiv as a goodwill gesture in peace talks. Ukraine and its allies say Russia was forced to shift its focus to east Ukraine after suffering heavy losses.

Both sides described talks held this week in Istanbul and by video link as “difficult”. Kremlin spokesperson Dmitry Peskov said on Saturday the “main thing is that the talks continue, either in Istanbul or somewhere else”.

A new round of talks has not yet been announced. But Ukrainian negotiator David Arakhamia said on Saturday that enough progress had been made to allow direct talks between Russian President Vladimir Putin and Zelenskyy.

“The Russian side confirmed our thesis that the draft documents have been sufficiently developed to allow direct consultations between the two countries' leaders,” Arakhamia said. Russia has not commented on the possibility.

Among those killed near Kyiv was Maksim Levin, a Ukrainian photographer and videographer who was working for a news website and was a long-time contributor to Reuters.

His body was found in a village north of Kyiv on April 1, the news website LB.ua where he worked said on Saturday.

In the east, the Red Cross was hoping a convoy to evacuate civilians would reach the besieged port of Mariupol on Sunday, having abandoned earlier attempts due to security concerns. Russia blamed the ICRC for the delays.

Mariupol is Russia's main target in Ukraine's southeastern region of Donbas, and tens of thousands of civilians there are trapped with scant access to food and water.

Russia's defence ministry said its missiles had disabled military airfields in Poltava, in central Ukraine, and Dnipro, further south. It later said its forces had hit 28 Ukrainian military facilities across the country, including two weapons depots.

Rolling coverage of the situation in Ukraine after the military invasion by Russia.
News
4 months ago

Dick Muir's coaching career, and that of his assistant Grant Bashford, are in limbo as Russia's conflict with the Ukraine stretches into its sixth ...
Sport
4 months ago

‘They did it, they did these horrible things. It’s hard to believe’

Ukraine said on Saturday its forces had seized back all areas around Kyiv, claiming complete control of the capital region for the first time since ...
News
4 months ago