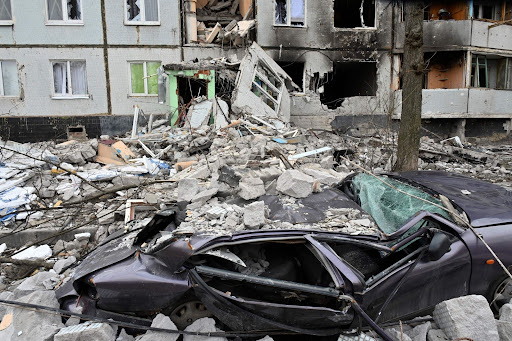 NATO foreign ministers are meeting in Brussels as the US and allies are coordinating on a new round of sanctions to punish the Kremlin for the alleged murders of civilians by its troops in Ukraine.
Image: Bloomberg

Nato foreign ministers are meeting in Brussels as the US and allies are co-ordinating on a new round of sanctions to punish the Kremlin for the alleged murders of civilians by its troops in Ukraine.

Russian forces continue to strike infrastructure targets in Ukraine, including fuel storage sites and grain silos, according to Ukrainian officials. The city of Mariupol remains under siege and the humanitarian situation has deteriorated, with most of the 160,000 remaining residents lacking access to electricity or food, the UK Minister of Defense warned. The Biden administration is sending another $100 million in military equipment to Ukraine, which is expected to include Javelin anti-tank missiles.

Ukrainian President Volodymyr Zelenskiy urged the United Nations to do more to stop Moscow’s aggression, while China’s envoy to the United Nations expressed dismay at the killing of unarmed civilians without condemning Russian President Vladimir Putin, with whom President Xi Jinping has close ties, for the violence. Russia has repeatedly denied the accusations of killing civilians, dismissing the documentation of the deaths.

“I think that measures on oil and even gas will also be needed sooner or later,” he said, condemning reports of atrocities by retreating Russian forces in Ukraine. He also said that the bloc should consider granting asylum to deserting Russian soldiers.

Dutch Probing Ownership of 12 Yachts Under Construction (9:15am.)

The Netherlands has frozen 516 million euros ($562 million) of Russian assets through financial institutions and trust offices, according to a letter by Foreign Minister Wopke Hoekstra.

A total of 12 yachts are under construction at five shipyards for Russian owners and those vessels are not allowed to be delivered at the moment due to current export restrictions. The ownership structures of the yachts are under investigation, while the government is investigating one yacht’s link to a person on the EU sanctions list, he said.

Hungarian Foreign Minister Peter Szijjarto has summoned Ukraine’s ambassador in Budapest, deepening the diplomatic rift between the two countries. Szijjarto intends “to make it clear” that Hungary’s government finds it unacceptable that Ukrainian politicians express regret about “the democratic decision of the Hungarian people,” the minister wrote on Facebook.

The moves comes days after Viktor Orban’s resounding re-election victory, where he positioned himself as the candidate for peace. Hungary’s government has long been cultivated close ties to Putin’s Russia.

Moscow continues targeting Ukraine’s economic infrastructure, including an oil storage in Dnipropetrovsk region and an unidentified plant that were shelled overnight, according to a regional governor, Valentyn Reznichenko.

Russian car sales plunged last month as sanctions imposed over the invasion of Ukraine battered the rouble and many global auto companies joined a boycott of the country, leaving buyers confronting sparse showrooms.

New vehicle sales fell 60% in March from the previous month at Rolf, Russia’s largest dealership, according to CEO Svetlana Vinogradovan.

The US, European Union and Group of Seven are co-ordinating on a fresh round of sanctions on Russia, including a US bar on investment in the country and an EU ban on coal imports, following the discovery of civilian murders and other apparent atrocities in Ukrainian towns abandoned by retreating Russian forces.

The European Union’s foreign policy chief described a summit with Chinese President Xi Jinping as a “deaf dialogue,” casting doubt on how much co-operation the Asian nation will offer to end the war.

China’s envoy to the United Nations expressed dismay at the killing of unarmed civilians in Bucha, while calling on all sides to refrain judgment until a probe establishes who is responsible.

Still, Ambassador Zhang Jun stopped short of condemning Putin for the violence. China has come under increased pressure from the Washington and Brussels to take a clear stance on the conflict, as its diplomats and state media play down civilian casualties and cast Putin as a victim of a US-backed eastward expansion of Nato.

Oil erased early losses after the European Union eschewed sanctions on Russian oil, and investors weighed the outlook for the dollar.

West Texas Intermediate traded near $102 a barrel after slipping as much as 1.6%. While the EU will press on with additional penalties against Moscow for the war in Ukraine, including a ban on coal, crude won’t yet be targeted. European Commission President Ursula von der Leyen said the bloc will still push ahead with a debate among members on tackling Russian oil.

Intel said it has suspended all business operations in Russia following its earlier decision to suspend all shipments to customers in Russia and Belarus.

US to Send More Military Aid

The US is sending another $100 million in military equipment to Ukraine, the White House announced. The money will go towards purchasing more Javelin anti-tank missiles for the Ukrainian military, according to a White House official who requested anonymity to describe the new shipment.

Javelin missiles have been effective against Russian armoured vehicles during the six-week-long invasion and Ukrainian leaders have continued to request them from the U.S. The weapons are being sent after Biden administration warned Russia is repositioning forces from around Kyiv to prepare for a renewed assault on areas in eastern and southern Ukraine.

Combined with $300 million in assistance announced by the Department of Defense on April 1, the new aid brings total US assistance to $1.7 billion since the start of Russia’s invasion in late February, Secretary of State Antony Blinken said in a statement.