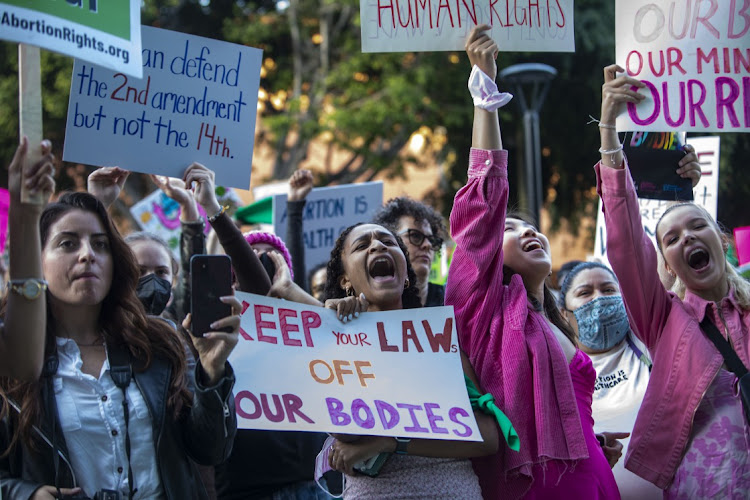 Demonstrators during an abortion-rights protest in Los Angeles, California, US, on May 3, 2022.
Image: Jill Connelly/Bloomberg

US President Joe Biden on Tuesday appealed to voters to protect abortion rights by backing candidates who support them in November's elections after a leaked Supreme Court draft showed it could soon overturn its 1973 decision legalising abortion.

Biden said his administration would respond once the Supreme Court formally rules but stopped short of calling for more radical changes - including a push to have the Senate change its rules to allow a simple majority to pass a law guaranteeing access to abortions.

The Senate is split 50-50 between Republicans and Biden's Democrats, with Vice President Kamala Harris able to break any tie.

A draft Supreme Court decision, leaked late on Monday, showed a majority of justices prepared to overturn the 1973 Roe v. Wade decision that protects abortion rights. The court on Tuesday confirmed the authenticity of the leaked document.

The ruling piles more pressure on Biden, who is already grappling with the US response to Russia's invasion of Ukraine and efforts to tamp down high inflation at home.

Former President Donald Trump, who had promised to appoint justices who would overturn abortion rights, was able to seat three jurists during his four-year term, giving the court a 6-3 conservative majority.

Biden on Tuesday pressed voters to send more candidates to Congress who support women's rights to choose to get abortions.

"If the Court does overturn Roe, it will fall on our nation's elected officials at all levels of government to protect a woman's right to choose. And it will fall on voters to elect pro-choice officials this November," Biden said in a carefully-worded written statement drafted with top aides.

"At the federal level, we will need more pro-choice Senators and a pro-choice majority in the House to adopt legislation that codifies Roe, which I will work to pass and sign into law."

Anti-abortion activists and pro-abortion supporters took to the streets of Washington on Tuesday after news that the US Supreme Court may overturn ...
News
1 month ago

Control of the House of Representatives, in which Democrats have a slim majority, and the Senate are at stake in the November elections, and Republicans have been expected to win majorities in one or both chambers.

Harris, the first woman to serve as vice president, said opponents of Roe were seeking to take away women's rights to make decisions about their own bodies.

"The rights of all Americans are at risk," she said. "If the right to privacy is weakened, every person could face a future in which the government can potentially interfere in the personal decisions you make about your life. This is the time to fight for women and for our country with everything we have."

Biden said the ruling could reverberate beyond a woman's right to terminate her pregnancy, mentioning same-sex marriage and other freedoms.

"It would mean that every other decision relating to the notion of privacy is thrown into question," Biden told reporters at Joint Base Andrews outside of Washington ahead of a trip to Alabama. "It's a fundamental shift in American jurisprudence if it were to hold."

The Roe decision recognised that the right to personal privacy under the US Constitution protects a woman's ability to terminate her pregnancy.

Biden said that as more restrictive Republican-backed abortion laws have been enacted in various states and with the Supreme Court ruling looming, he has directed White House officials to prepare options for an administration response.

The Supreme Court ruling in the abortion case from Mississippi, due by the end of June, could energise voters on both sides of the issue to turn out in the midterm elections.

Based on Alito's opinion, the court would find that the Roe v. Wade decision that allowed abortions performed before a fetus would be viable outside the womb - between 24 and 28 weeks of pregnancy - was wrongly decided because the US Constitution makes no specific mention of abortion rights.

Protesters rallied under the slogan "off our bodies" in cities across the United States on Tuesday, demanding abortion rights be protected after the ...
News
1 month ago

Florida's House of Representatives passed a bill to ban abortions after 15 weeks of pregnancy late on Wednesday, a measure several Republican-led ...
News
4 months ago