WATCH | 'What are we doing?' US senator pleads for action after Texas shooting claims 21 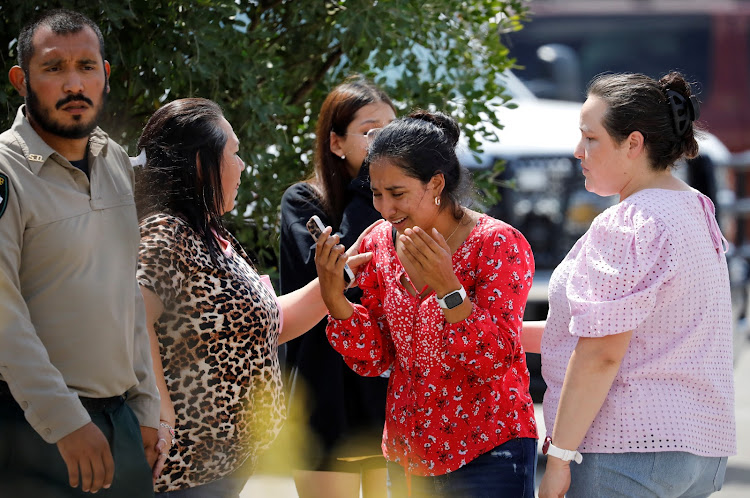 A woman reacts outside the Sgt Willie de Leon Civic Center, where students had been transported from Robb Elementary School after a shooting, in Uvalde, Texas, on May 24 2022.
Image: REUTERS/Marco Bello

Democratic US Senator Chris Murphy on Tuesday implored his colleagues to act to combat gun violence hours after a mass shooter killed 19 Texas schoolchildren, dismissing a common Republican argument by saying, “Spare me the bullshit about mental illness.”

Murphy, who before his election to the Senate represented the Connecticut congressional district where a gunman killed 26 young children and educators at Sandy Hook Elementary School in 2012, urged his colleagues to craft legislation to restrict the proliferation of guns.

There's just not a coincidence that we're the high-income-world's deadliest nation and we have the loosest gunlaws. You know, guns flow in this country like water. And that's why we have mass shooting after mass shooting.”

Previous efforts to pass new federal restrictions on guns failed after the Sandy Hook shooting, a 2017 attack on Republican members of Congress practising baseball, and an attack just 10 days ago at a Buffalo, New York, grocery store.

Many Republican lawmakers, who typically oppose new restrictions on gun ownership, after past attacks have argued that the US needs to do more to end mental illness, which can drive some shooters.

“Spare me the bullshit about mental illness,” Murphy said, anticipating that response to Tuesday's massacre, which killed two teachers and 19 students.

“We don't have any more mental illness than any other country in the world. You cannot explain this through a prism of mental illness because we're not an outlier on mental illness ... We're an outlier when it comes to access to firearms and the ability of criminals and very sick people to get their arms on firearms.

The US Supreme Court in the coming weeks is expected to rule on a case that could greatly expand the right to carry concealed handguns, in a challenge to a New York state law that opponents say violates the US constitution's second amendment right to keep and bear arms.

Murphy said he would be happy to work on a bipartisan solution, saying a bill needed to “show progress” and not necessarily be a perfect legislative fix.

“I'm happy to look at anything as long as it doesn't deny anybody rights for law-abiding citizens,” he told reporters.

First of funerals for 10 killed at Buffalo grocery held

The first funeral is being held on Friday for one of 10 people killed in a livestreamed shooting by an 18-year-old white man at a supermarket in a ...
News
1 month ago

Six people were killed and 12 injured in shooting on a Sacramento, California, street busy with revelers, and police said they were still searching ...
News
2 months ago