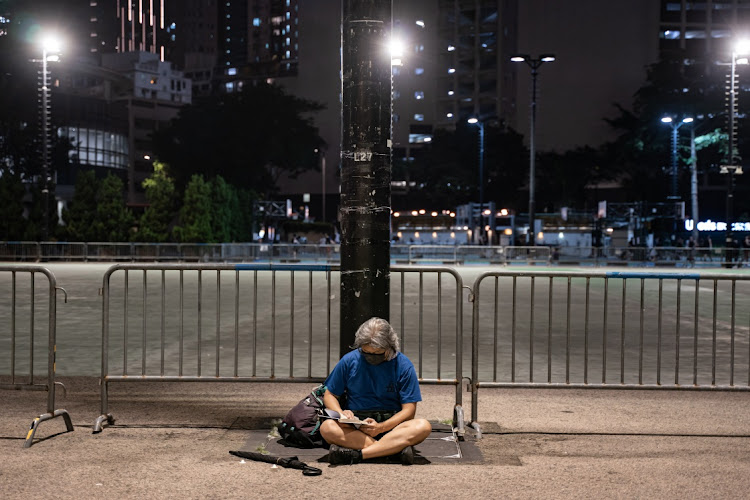 A man sits at the Victoria Park during a solitary vigil ahead of the 33rd anniversary of Tiananmen Square incident on June 03, 2022 in Hong Kong, China. The government announced to seal off the main parts of Victoria Park, where people gathered for the annual June 4 vigil. Police also have warned the public not to test their determination to enforce the law on June 4, adding that even going alone could end in an arrest for unlawful assembly, if someone is deemed to be there with a common purpose to express certain views.
Image: Anthony Kwan/Getty Images

Hong Kong deployed heavy security near a major park on Saturday as it warned people not to gather to commemorate China's bloody crackdown on pro-democracy demonstrators in Tiananmen Square 33 years ago, as Taiwan decried efforts to erase the memories.

Saturday marks the anniversary of Chinese troops opening fire to end the student-led unrest in and about the square in central Beijing. China has never provided a full death toll, but rights groups and witnesses say the figure could run into the thousands.

“To remember is to resist,” prominent Chinese human rights lawyer Teng Biao told Reuters from the US. “If nobody remembers, the suffering of the people will never stop and the perpetrators will continue their crimes with impunity.”

Chinese authorities ban any public commemoration of the event on the mainland, and the Hong Kong authorities have clamped down too.

In Hong Kong's Victoria Park, where people had come together for an annual vigil before the COVID-19 pandemic hit, authorities blocked off main parts of the venue and warned people against illegal gatherings.

The city's leader, Carrie Lam, said this week that any events to commemorate those killed in the 1989 crackdown would be subject to national security laws.

China imposed a tough national security law on Hong Kong in June 2020 punishing acts of subversion, terrorism and collusion with foreign forces with up to life in prison.

Hong Kong's government has banned the annual vigil since 2020, citing coronavirus restrictions. Some democracy campaigners accuse authorities of using those rules to suppress activism, a claim that officials reject.

Current COVID-19 restrictions allow up to eight people to dine together, though gatherings outside are capped at four people.

Last year, police blocked off the Hong Kong park to prevent people gathering to commemorate the anniversary and arrested the planned vigil's organiser.

In Chinese-claimed but staunchly democratic Taiwan, where public commemorations are due on Saturday in Taipei, President Tsai Ing-wen decried the “collective memory of June 4 being systematically erased in Hong Kong”.

“But we believe that such brute force cannot erase people's memories,” she posted on her Facebook and Instagram pages. “When democracy is threatened and authoritarianism in the world is expanding, we need to uphold democratic values.”

Taiwan tends to use the Tiananmen Square anniversary to criticise China and urge it to face up to what it did, to Beijing's repeated annoyance.

U.S. Secretary of state Antony Blinken, in a statement on Saturday Asia time, called the Tiananmen crackdown “a brutal assault”.

“The efforts of these brave individuals will not be forgotten. Each year, we honour and remember those who stood up for human rights and fundamental freedoms,” he said.

“To the people of China and to those who continue to stand against injustice and seek freedom, we will not forget June 4.”

Chinese Foreign Ministry spokesperson Zhao Lijian, at a routine news conference on Thursday, reiterated Beijing's line on the events. “The Chinese government has long ago come to a clear conclusion about the political incident that happened in late 1980s,” he said.

Michael Mina has long pushed for widespread testing as a way to stop Covid-19 outbreaks in their tracks. But what China is doing, he says, is going ...
News
2 months ago

Cheap shot: India risks sanctions if it continues to oil its cogs with Russian crude

The country, taking advantage of lower prices, has thrown Russia a lifeline, but cheap could come at a cost
World
2 months ago

Australia is poised for a third year of near-record wheat production in 2022 as good weather boosts planting across its grain belt, easing concerns ...
News
2 months ago