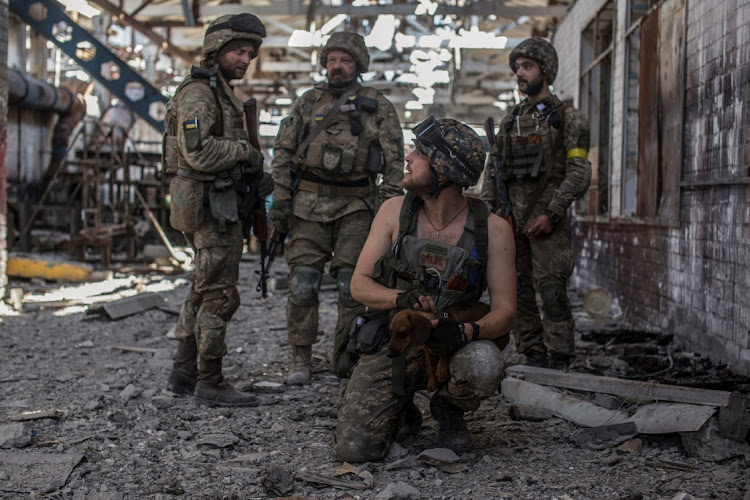 Ukrainian service members in the industrial area of the city of Sievierodonetsk.
Image: REUTERS/Oleksandr Ratushniak

Ukrainian and Russian forces were entrenched in eastern Ukrainian battlegrounds on Wednesday, a day of commemoration in both countries to mark the anniversary of Adolf Hitler's invasion of the Soviet Union in 1941.

Fighting in the months-long war has favoured Russia in recent weeks because of its huge edge in artillery firepower, a fact Ukrainian President Volodymyr Zelensky acknowledged in an address on Tuesday.

“Thanks to tactical manoeuvres the Ukrainian army is strengthening its defences in the Luhansk region,” he said.

“That is really the toughest spot. The occupiers are also pressing strongly in the direction of Donetsk.”

Luhansk and Donetsk provinces combined are known as the Donbas, where Russian-backed separatists have been fighting Ukrainian forces since 2014 after Russia's annexation of Crimea from Ukraine.

“Just as actively as we are fighting for a positive decision by the European Union on Ukraine's candidate status, we are also fighting every day for modern weaponry for our country. We don't let up for a single day,” Zelensky said, urging his country's supporters to speed up arms deliveries.

In a symbolic decision, Ukraine is set to become an official candidate for EU membership on Thursday, EU diplomats said.

Russia's failure to make a major breakthrough since invading Ukraine on February 24 means time is on the side of Ukrainians, according to some military analysts.

“It's a heavyweight boxing match. In two months of fighting, there has not yet been a knockout blow. It will come, as Russian forces become more depleted,” retired US Lt-Gen Mark Hertling, a former commander of US ground forces in Europe, wrote on Twitter.

June 22 is a significant date in Russia — the “Day of Remembrance and Sorrow” — marking when Hitler's Nazi Germany forces invaded the Soviet Union in World War 2. It is also commemorated in Ukraine and neighbouring Belarus, then part of the Soviet Union. The war there lasted 1,418 days from June 22 1941, and historians estimate about 27-million Soviet soldiers and civilians were killed.

Russian President Vladimir Putin, who launched what he calls a “special military operation” in Ukraine to root out Nazis, is due to lay flowers to honour the dead.

The Ukrainian government and its Western backers said Putin has used a false pretext to wage an unprovoked war of aggression on its neighbour.

To mark the anniversary, the Russian defence ministry on Wednesday released documents dating back to the beginning of World War 2 purporting to show Germany intended to claim the Soviet army was bombing churches and cemeteries to justify its invasion.

“Just as nowadays, in 1941  the Nazis prepared provocations in advance to discredit our state,” Russia's defence ministry said.

Russian forces and separatists in east Ukraine made advances on Tuesday, pushing towards Lysychansk, the Ukrainian forces' main bastion in the Donbas.

In some of the bloodiest fighting in Europe since World War 2, Russia has made slow progress in the Donbas since April in a conflict that has cost thousands of soldiers' lives on both sides.

The separatist Donetsk People's Republic had acknowledged more than 2,000 military personnel killed and almost 9,000 wounded since the beginning of the year, according to British military intelligence. That was equivalent to about 55% of its original force, it said.

But Ukrainian troops — and an estimated 500 civilians — are reportedly still holding out at a chemical plant in the east bank city of Sievierodonetsk.

The governor of Luhansk province, Serhiy Gaidai, said Russians were advancing towards Lysychansk, attacking the buildings of police, state security and prosecutors, taking settlements and attacking the city with aircraft.

Oleskiy Arestovych, an adviser to Zelensky, said Russian forces could cut off Lysychansk and Sievierodonetsk from Ukrainian-held territory.

“The threat of a tactical Russian victory is there, but they haven't done it yet,” he said in an online video.

Attacks have picked up in the Kharkiv region in the northeast, with at least 15 civilians killed by Russian shelling, its governor said on Tuesday.

“Russian forces are hitting the city of Kharkiv in the same way that they previously were hitting Mariupol — with the aim of terrorising the population,” Arestovych said.

“The idea is to create one big problem to distract us.”

Reuters could not immediately confirm the battlefield accounts.

In retaliation for Western sanctions, Russia has begun pumping lower volumes of gas to Europe via Ukraine.

EU states have outlined measures to cope with a supply crisis after the invasion put energy at the heart of an economic battle between Russia and the West.

Russia warned Lithuania on Tuesday it would face measures of a “serious negative impact” for blocking some shipments by rail to Russia's Baltic Sea enclave of Kaliningrad.

Fellow Baltic nation Estonia expressed solidarity with Lithuania and summoned the Russian ambassador to protest against an “extremely serious” violation of its airspace by a Russian helicopter.

African countries are acutely affected by the growing crisis, which has sent prices of grains, cooking oils, fuel and fertiliser soaring.
News
2 weeks ago

The war in Ukraine could last for years, the head of Nato said on Sunday, calling for steadfast support from Ukraine's allies as Russian forces ...
News
2 weeks ago