ANC's 'better life for all' is a fairy tale: Numsa 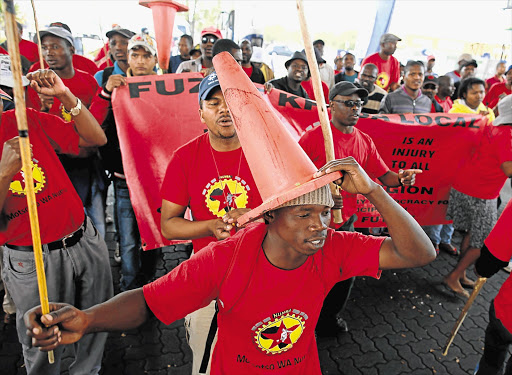 UP IN ARMS: Numsa members blockade the entrance to an Engen garage in Germiston as they picket outside the garage this week.
Image: Simphiwe Nkwali

The working class and the poor have no good story to tell about how their lives have been changed for the better, National Union of Metalworkers of South Africa (Numsa) president Andrew Chirwa said.

"There is no good story to tell. It is a fairy tale. The working class and poor people have a bad story to tell," he said at the opening of Numsa's national bargaining conference in Pretoria.

Nothing had been achieved to change the lives of the poor, said Chirwa.

"We cannot lie forever.... In 1994 we said SA will be a better place to live, unemployment will be halved in 10 years. Unemployment was supposed to be 12 percent by now.

"What have we achieved in this regard? We are not moving forward. Instead we are worse than 10 years ago."

He said all the ANC had achieved was replacing white capital with black capital.

The struggle for freedom had got rid of apartheid, but capitalism remained.

"A white man was replaced by a black man."

The working class was under siege.

"Working class, employed and unemployed is under siege.... For the first time a litre of petrol is about R15."

Delegates wearing red union T-shirts and black and red tracksuits clapped their hands and others whistled as they sang.

"It is nice to trust in Numsa," they sang in isiZulu.

There was a giant poster of former president Nelson Mandela on the right side of the podium and one showing former Numsa leaders on the left.